On Tuesday January 24, 2012 Greece and the world of cinema lost one of its favourite sons, director and filmmaker Theodoros Angelopoulos. 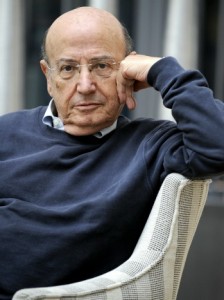 Angelopoulos was struck down by a motorcycle as he was attempting to cross a busy highway while on location filming his latest film “The Other Sea”, which is about immigration and the crisis in contemporary Greece. He wanted to check his “frame” as co-workers said. He had bad visibility from where he was standing and the light of day was fading fast since it was late in the afternoon.

He was born in Athens in 1935. He studied law at the University of Athens but found it boring. After completing his military service he moved to Paris and attended the Sorbonne to study philosophy but he actually spent most of his time at the Cinémathèque Française. Changing schools once again he enrolled in the Institut des Hautes Études Cinématographiques, France’s chief film school, before returning to Greece in 1964 where he worked as a newspaper film critic and then began his career in film as a director.

He soon carved a unique niche for himself as one of the best international film directors of the 20th century with many critics comparing his films to those of Michelangelo Antonioni and Akira Kurosawa. His characteristic style of long single scene takes and his breath stopping, evocative imagery but also his keen perspective on various historical periods of Greece won him numerous international film awards such as the Palme d’Or at Cannes and many others.

His films were always about the heart and soul of Greece, his beloved home. In a Los Angeles Times interview he said: “Greece is more than a geographical locale to me. It’s a spirit, a culture”.

His film “The Other Sea” which deals with the present day crisis in Greece will remain unfinished. His abrupt death came at a time when Greece needed his vision and insight more than ever before. But it was fate, his colleagues said, like the best of Greek tragedies and perhaps a fitting way for a figure like Angelopoulos to call it a wrap. He was 76.