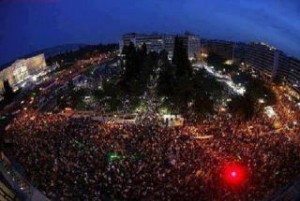 View of the peaceful protest in front of the Greek Parliament

On February 12, 2012, in the very late hours of the evening, the Greek Parliament struggled but succeeded in passing new and more severe austerity measures, imposed by the EU, in order to avoid financial default. The measures are considered by Greeks and non Greeks alike unusually harsh and derogatory.

For Greece the path ahead will be one of extreme hardship and sacrifice but one that must and will be endured. Greece is a strong, proud and above all freedom loving nation who has experienced foreign occupations, wars and dictatorships. In the end democracy always prevailed.

A vast peaceful demonstration took place in front of the Parliament where thousands of people gathered to protest against the austerity plan which ended up violent due to error handling of the Greek Police using tear gas and violence to disperse the thousands of demonstrators.

Athens Walking Tours would like to point out that Greece and especially Athens  regardless of periodic incidents of protest is one of the safest cities in Europe and of the world and that our tours have been operating on a regular basis without suspension even throughout periods of unrest. We would also like to assure you that every necessary precaution is taken for the complete safety of our clients during our tours and if the situation is considered hazardous or unsafe then it is cancelled.