Pasteli, The Food of Champions

The Ancient Greeks did not only leave us with a colossal cultural legacy but also with a nutritionally wise culinary legacy as well.

The staples of the ancient Greek diet were olives, honey, sesame seeds, pulses, fish, fruits and wine. The culture of ancient Athens in particular produced more geniuses per capita than any other culture before or since. What they ate may or may not have had something to do with it but the fact is open to speculation. 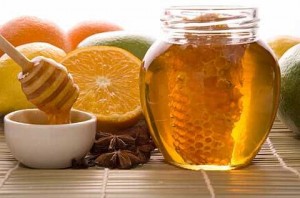 One of those foods is still very popular among Greeks today and is perhaps the first “energy bar” in history. Pasteli, a confection made primarily of honey and sesame seeds was consumed regularly by the original Olympians. It was also the traditional “wedding cake” offered at wedding ceremonies to the bride and the groom because sesames symbolized fertility and honey symbolized a sweet life. But even earlier than that we find references to Pasteli, then called Intrion, in Homers Iliad where it was eaten by the Hellenes to help them endure the physical demands of wartime.

It is easy to see why this food was not only a delicacy but highly valued for its nutritional properties. Sesame seeds are remarkably high in copper, manganese, calcium, tryptophan, magnesium, iron, zinc, fiber and vitamin B1. Every one of these nutrients is vital to the proper functioning of the human body and help in the prevention of anemia, osteoporosis, and joint problems. They may also help with the maintenance of the ratio of LDL to HDL cholesterol, as well as aid in correcting an irregular heartbeat. Manganese relaxes your nerves and muscles, helps build strong bones, and keeps up a healthy blood circulation. Tryptophan can regulate your appetite, help you sleep better, and may act as a mood elevator. There is as much calcium in a tablespoon of sesame seeds as there is in half a glass of milk. Sesame seeds are also powerful antioxidants.

Honey is also an amazing food in itself. Apart from also being a mega antioxidant it is also an anti-inflammatory, and an antimicrobal. It can aid digestive, gastrointestinal and respiratory tracts, as well as help with migraines, gastritis and rheumatism. Furthermore it enhances the body’s use of energy during exercise and has been thought to reduce recovery time after injury. 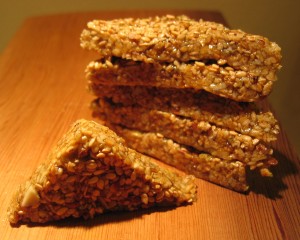 Today Pasteli can be found everywhere in Greece and at specialty food stores around the world. If you find yourself at a Greek airport you can easily find it at the duty free shops or sign up for the Athens Food Tour and taste for yourself this amazing and delicious power food of the Greeks.