This is a place you will have to visit while in Athens. Why? because  this is the birthplace of theater, thus the most significant theater in Europe.  It is also Europe’s oldest theater. We at the Athens Walking tours take special care and show  our guests  the Dionysus theater because we believe it is “a must visit site in Athens“.  It is a pity to have visited Athens and not having stood by  the birthplace of theater and it is even more pity to have come so close to it by visiting the Acropolis and not had a chance of taking a picture from up close. 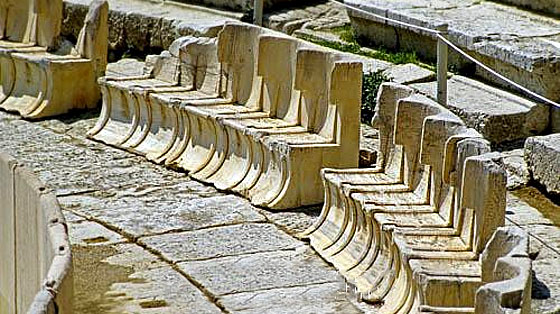 The Theatre of Dionysus is a major open-air  theater and one of the earliest preserved in Athens and it was used for festivals in honor of the god  Dionysus. It  was Europe’s first theater, and  is located  in the Southern slope of the Acropolis  underneath  the Parthenon.  It was originally built in the late 5th century B.C and was modified by the Romans later, so very little from the original Theater has been preserved today.  Its capacity is 17.000 spectators.

What impresses the visitor is the front rows consisted of marble chairs which  were the only seats in the theater that had a back support. They were the VIP seats  for priests of Dionysus and the chief magistrates of Athens.  Priests claimed 50 of the 67 front row seats, then came the officials, the guests of honor, then finally the ordinary citizens of Athens.  Beyond the front row, stood a circular space called the orchestra where the Chorus would sing and dance, and in the center of which stood the alter of Dionysus.  Behind the orchestra, lied a heavy rectangular foundation known as the stage on which the actors would perform their section of the play.  The back of the stage had a building painted to look like the front of a temple or a palace.  Here, the actors would retire when they were not needed on stage or would go to when they had to change their costumes.