The Antikythera Mechanism: The Most Hi-Tech Archaeological Discovery Ever Found

The Antikythera Mechanism is, what many scientists believe, the oldest mechanical portable computer in history and was probably used to calculate astronomical and calendar positions.
The mechanism displayed the positions of the Sun, the Moon and most probably the five planets known in antiquity, Mercury, Venus, Mars, Jupiter and Saturn. It could predict solar and lunar eclipses, it could keep an accurate calendar of up to many years and displayed the date of the Pan-Hellenic games that took place at Nemea, Isthmia, Delphi, Dodona and Olympia. 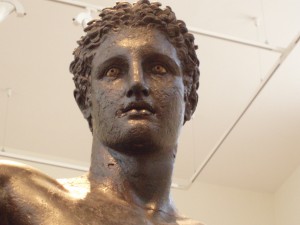 The Mechanism was found, among other artifacts, in the cargo of a ship that sank off the Greek island of Antikythera, located opposite the island of Kythera on the edge of the Aegean Sea between Crete and the Peloponnese, in the 2nd century BC. The wreck was discovered by Greek sponge divers in 1901. Seven large fragments and 75 minor pieces of the Mechanism have survived but the Mechanisms original location and structure is a subject under intense investigation.  Professor Michael Edmunds of Cardiff University who led the most recent study of the mechanism said: “This device is just extraordinary, the only thing of its kind. The design is beautiful, the astronomy is exactly right. The way the mechanics are designed just makes your jaw drop. Whoever has done this has done it extremely carefully … in terms of historic and scarcity value, I have to regard this mechanism as being more valuable than the Mona Lisa.”

The Antikythera Mechanism is the most precious piece of ancient technology to have survived. It demonstrates the philosophical and geocentric approach that most ancient Greek thinkers held towards their explanation of the physical world and its structure according to which mathematics and physics were the means for deciphering the universe.

The most amazing fact of all is that the construction of this extraordinary scientific tool has been dated as early as the 1st century BCE! And the second most amazing fact is that it took humanity over a thousand years to produce another device which was of similar complexity and workmanship making the Antikythera Mechanism an indisputable argument  to the astronomical, mathematical and mechanical genius of the ancient Greeks of the Hellenistic period.

The Antikythera Mechanism at the National Archaeological Museum of Greece

If you are in Athens or are planning a trip to Athens you can see this amazing mechanism at the National Archaeological Museum of Greece. The three main fragments of the Antikythera Mechanism are on display at the Bronze Collection of the Museum. The Mechanism is kept within the Museum collections since its discovery in 1901.
Other bronze artifacts from the Antikythera wreck are also on display within the same room, while statues and other objects from the wreck (like magnificent glassware) can be admired in other rooms and the atrium. 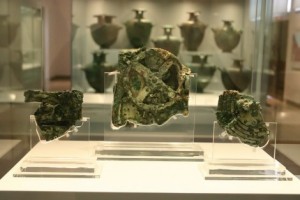 insight on the Antikythera Mechanism but also take you on a fascinating journey of the Greek civilization from prehistory to late antiquity. Find out more here.

If you want to learn more about this amazing piece of technology watch this video.