The Birth Of Athena 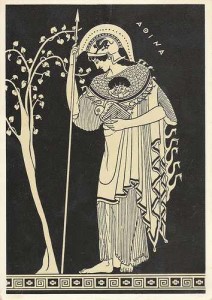 The city of Athens, the city where democracy was born, was named and dedicated to Athena, the Goddess of Wisdom, courage, inspiration, civilization, law and justice, just warfare, mathematics, strength, strategy, the arts, crafts, and skill and brilliantly lived up to the legacy of its’ benefactresses name.

But few people are familiar with the interesting story of how the Goddess Athena was created. One fine day Zeus had intercourse with Metis, the Goddess of Crafty thought and wisdom but immediately regretted the union as he remembered a prophecy which stated that the result of his union with Metis would produce offspring much more powerful than the father.  So what did powerful Zeus do to reverse the act? He swallowed Metis thinking that she would quickly be digested away. But alas, Metis had conceived and thus the prophecy was realized.Very soon after Zeus began to experience excruciating headaches and begged Ares, the god of war to break his head open with an axe, (some versions say that it was Hephaestus who performed the divine “brain surgery”). Upon doing so Athena leaped out of Zeus’s head, fully grown, dressed and armed and screaming a battle cry. The sky and earth trembled and Ares said “ Zeus, you have fathered a rash and foolish daughter who delights only in guilty acts.  All the other Gods who live on Olympus obey you and each of us submits to your will.  But she, to you never curbs neither by word nor deed; she does as she pleases”.

But whether it was out of fear or fatherly love, Athena was Zeus’s favorite child and he spoiled and indulged her, many times creating jealousy and rife among the other Gods of Olympus.

What is the moral of this story? To avoid headaches don’t eat your pregnant spouse!

To learn more about this and other fascinating Greek myths sign up for the Acropolis, City Tour & Acropolis Museum Tour at the Athens Walking Tours!