Less than 200 kilometers northeast of Athens, nestled in the embrace of Mt. Parnassus, is perhaps the most sacred site of the ancient world. It was believed to be the center of the earth, the center of wisdom and spirituality. This place is called Delphi. In ancient times it was a sanctuary dedicated to the god Apollo and was most famous for its oracle where it is said that Apollo spoke through his priestess Pythia. 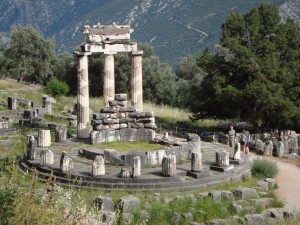 The Temple of Athena at Delphi

The Oracle at Delphi was believed to successfully predict future events for over a thousand years.  An oracle was a person who was considered a portal to the gods. When Pythia spoke, it was the voice and the will of the gods that spoke through her.

But why Delphi; why is this particular site considered the center of the earth? I have been to Delphi many times and will go many more for it is a place of exceptional beauty, peace and – yes I hate to admit it – energy. But the answer to my question continues to elude me.

Here are a few facts that I found when I researched the importance of the location of Delphi. First of all the latitude of Delphi (38° 37′ N,) is almost exactly 3/7th of the distance from the Equator to the Pole. But the most significant piece of information that I found was this; Delphi was considered the navel of the earth because it is the connecting point to the most significant sacred sites of ancient Greece.  This explains why both Plato and Aristotle stated that the ‘Delphic priests were responsible for placing temples and shrines in accordance with a Sacred Law’.

The Sacred Isosceles Triangle between the Acropolis of Athens, Delphi and Olympia

This information only verifies that Delphi was perhaps the most significant site of the ancient world. But it does not provide us with a “why”.  Perhaps this is something that we must all discover for ourselves by visiting Delphi.

Once written on the temple of Apollo were the aphorisms “know thyself” and “nothing in excess”.  Of all the achievements that man can attain for himself in a lifetime perhaps the most significant and noble is to know thyself and if you are going to cross the threshold between heaven and earth you better be prepared.

I will never tire of saying this, Greece is not only the Acropolis of Athens.  Greece has countless sites and places of beauty worthy of being added to your “what to see in my lifetime” list.  And Delphi is definitely one of them.

The Athens Walking Tours provides a detailed private tour of Delphi. For a very reasonable price they can arrange for a private transfer from your hotel directly to the gates of Delphi where your personal licensed guide will be waiting to make one of the most profound experiences in Greece only an email away.

You can also take a look at the group tours we organise to Delphi.