The Greek Carnival or Apokries in Athens

It is a well known fact that the Christian religion “borrowed” much of its symbolism and ceremony from Pagan beliefs; as is the case with the tradition that we all know today as Carnival or “Apokries” as we say in Greece. 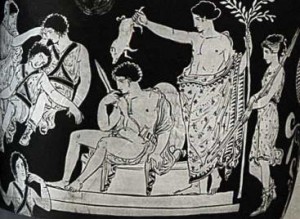 The roots of carnival reach back to the Greek Dionysian festivals, held in ancient Athens and second in importance only to the Panathenaia. This event took place in early spring, and although the official celebrations were commemorated by the best theatrical performances of the day, in essence it was a celebration of fertility and rebirth.

Dionysus, also known as Bacchus, was often seen as the god of everything uncivilized. He represented liberation from formality and from one’s normal self. His mission was to mingle wine and music and bring on transformation by inducing a state of ecstasy. This was typically a time to let go of all inhibitions, challenge boundaries, values and hierarchies and established laws. The followers of the God would race through the streets dancing wildly, some brandishing giant phalluses, banging drums, singing rude songs and causing a general ruckus. This was done for two reasons; to banish harmful spirits and to wake up Mother Nature, to provoke her from the bowels of the earth to come back to life.

The Routes Of Carnival In Greece

Apokries in Greece begins 60 days before Easter and lasts for 3 weeks and is called the Triodion. The word comes from “tris odes” meaning the three hymns that are sung in church during this time. The first week is called “Profini” (announcement) because traditionally, someone on a tall hill top would announce the beginning of Carnival. The fun starts on the second week which is called “Kreatini” (meat week) and on that Thursday we celebrate “Tsiknopempti” which I like to call “stinky Thursday”. Traditionally everyone must cook meat until the smoke or “tsikna” permeates the air so that everyone knows it’s a feast day. Not a good day for practicing vegetarians! 🙂

On this day the first masqueraders make their appearance and the Carnival season officially begins. Apokries ends on “Kathara Deftera” or Clean Monday and the 40 day period of Lent begins; a much needed rest from the merriment and necessary purification of body and spirit.

Apokries is a very important cultural tradition rich with social and spiritual symbolism. If your are in Greece during this time you must definitely take advantage of the many celebrations taking place, almost certainly, somewhere nearby. The city of Patras has the most famous Carnival celebration in Greece but other cities such as Xanthi, Naousa, Rethymno and the island of Naxos have noteworthy carnival festivities and honor ancient pagan traditions. Athens celebrates with plays, usually by Aristophanes, shadow theatre,  street parties, bands, traditional music, and other performances which take place in Plaka in the area around the Acropolis and in various other neighborhoods and suburbs of the city.

The carnival season marks the beginning of a two month period in Greece which, in my opinion, is the most meaningful and mindful of all. It is a period where the carnal and the celestial are reconciled and combined. Beginning with the pagan rituals and Dionysian overindulgences to the pious spirituality and in wardness of lent and the culminating triumph of life over death, light over darkness on Holy Saturday and Easter Sunday.

Whether or not you are an Orthodox Christian this season in Greece has something to offer to everyone. You do not have to follow a certain religion to recognize the most essential values of humanity which are at the core of these practices.
All you have to do is feel, share and clear space within yourself for a new experience to unfold and perhaps transform a part of you as well!