I have been living in Athens off and on now for the last twenty years and I have witnessed many changes that have taken Athens into the 21st century. From the construction of the new airport, new highways, the metro and tram that have greatly improved city transportation and an enlightened urban renewal project in what once were some of the city’s most decrepit and dilapidated neighborhoods. These areas are known as Psirri, Kerameikos and Gazi and they have become the new “hot spots” of Athens giving off a kind of “you really want to be here” energy. 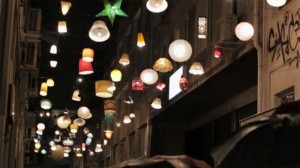 The famous “lampshade” street in Psirri.

Anytime during the day or night, the place is buzzing with activity and people from all walks of life.Trendy bars and restaurants, avant-garde galleries and museums and concert halls all make up the “Urban Spring” of Athens.

Picturesque Psirri has become a very popular and truly convenient location in the heart of Athens, next to Monastiraki and bordering with Plaka. It is a neighborhood of contrasts harmoniously blending the old with the new and rapidly turning into the Soho district of Athens with great places for lunch, charming little narrow streets with quaint little but very fashionable shops.

The best way to discover any city is on foot and the Athens Food Tour takes you into the heart of the Psirri area giving you the added opportunity of trying out some of the delicacies in the area to compliment your experience. 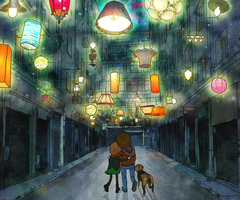 The majority of the streets in Psirri are pedestrian friendly making your walk even more enjoyable. If you are going on your own you can reach it easily on foot from Syntagma Square taking Ermou street all the way down till you reach Thiseion or Kerameikos metro stations.

Kerameikos and Gazi are two other neighborhoods in Athens which have given a new perspective to inner-city living. So much so that real estate in the area is thriving with new ultra modern office and apartment buildings being built or renovated. Just the other day during one of my walks I passed by this gorgeous red brick apartment complex with an interior olive grove which meant that every apartment had a view of this beautiful garden. 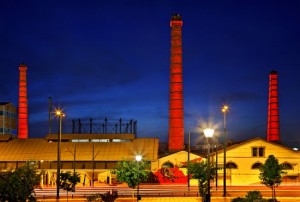 Kerameikos is a very ancient neighborhood and is famous for its cemetery dating back to 1200 BC. Back then it was the potters quarter of the city and the English word “ceramic” derives from keramiko. Today you can find some of the really cool restaurants, music clubs and bars in the area. Getting to Kerameikos is a beautiful scenic walk on the archaeological promenade, a pedestrian walking path circling some of the most important sites in Athenian history, starting from the Theseion metro train station and ending at Technopolis (Art city) which is located on Pireos street better known as Gazi which was the old gas works factory of Athens. Or you can take the Athens Metro and get off at Kerameikos station. 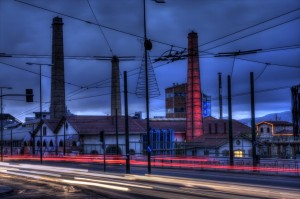 After the gas works factory closed in 1984 the area  of Gazi  turned into a ghost town of abandoned buildings and neglected shops. People moved out of their homes to more viable neighborhoods and only the very low income families remained. A remarkable revival came (the most of all the neighborhoods of Athens) when the city of Athens bought the factory and the surrounding property and turned it into a multi-purpose art and exhibition center, what is today known as “Technopolis” and dedicated to the famous Greek composer Manos Hadzidakis. Today the old smokestacks are illuminated with neon lights and can be seen from miles away and have become the areas’ trademark as well as the Athens art district. 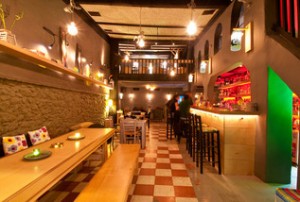 Gazi is truly a treat for art lovers or simply admirers of beauty and the industrial ambiance is an excellent backdrop for the progressive art and lifestyle attitude of this totally hip neighborhood. You will find fusion restaurants, interesting bars and cafes as well as some of the most notable art galleries and museums of the city. Don’t miss taking a tour inside the old factory which has retained its original architecture. It is well worth the visit. 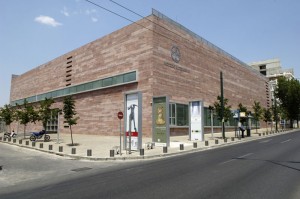 This urban renaissance is contagious and has spread to neighboring districts creating and can be referred to as the Arts and Cultural district of Athens. Within walking distance of Gazi which is located as I said before on Pireos Ave. you will also find the equally amazing Foundation of the Hellenic World (also converted from an old warehouse). This is a great visit if you have kids  because it features virtual tours of ancient Greece which are highly educational and enjoyable for people of all ages. Close by you will also find the new Benaki Museum with noteworthy exhibitions, film screenings, theater performances and concerts which all take place in its lovely internal courtyard.

Athens is changing or better yet I would say that Athens is evolving and finding a new image that she can feel comfortable with. Up till recent years tourists thought that Athens was just for the classical sites of antiquity like the Acropolis and the Ancient Agora which we all know are one of a kind. But Athens is also a modern city with an active and creative artistic community that is giving this ancient city a well overdue face lift.