A Memorable Day on Pandrossou Street 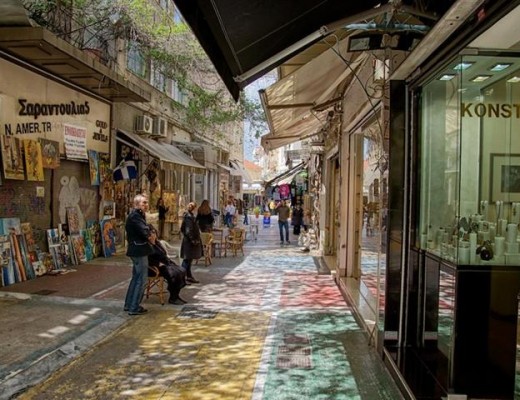 Light and Color on one of Athens’ most famous market streets.

Spending a Friday morning at the tax office is about as  pleasant as a molar extraction but it had to be done. I still hadn’t had my coffee. I looked at my watch, it was a quarter to nine.  I had a meeting with a colleague downtown and I was borderline going to be on-time so coffee had to wait. I hoped, rather prayed, I could  grab a quick espresso downtown.

Walking away from the train, my head hung low in thought and in serious need of a caffeine fix I see an impressively well dressed woman with bright red lipstick sweeping the  streets. From the orange vest she’s wearing I can tell she is a municipal street cleaner. She notices me looking at her and smiles. Well it wasn’t just a smile, it was a beam of light. I involuntarily smiled back, it just happened. I walked up to her and thanked her, I thanked her for taking so much pride in her work and that her smile made a difference in my day. I obviously caught her off guard but she shyly thanked me back. I was amazed at myself at being so nice, so early and without coffee. At that moment I sensed that this was going to be no ordinary day. 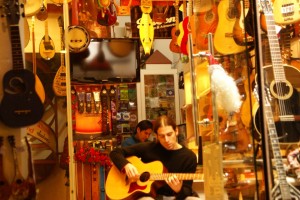 My colleague was on time and happy to see me. I pleaded for a cup of coffee and he told me he knew just the place so I followed obediently. He lead me towards Pandrossou  Market Street, a touristy street in the heart of Athens where I had often brought friends from the States when they wanted to shop for souvenirs. Everyone was opening shop, it was the first sunny day in about a week and everyone was hoping for good business. My colleague seemed to know quite a few shop owners as they waved and bid us good morning calling him by his first name. He turned to me and said that he had grown up on this street so he knew everybody. My mood was improving by the millisecond.

We turned into an arcade and walked up a flight of stairs. Judging by the window displays it looked as if we were going to an antique shop. There were old commercial posters from as early as the 1920’s, engravings, paintings, ceramic art, a collection of handmade silver stamps and seals that were absolutely exquisite, some embroidery, Byzantine icons, paintings, lithographs, a collection of old books, some furniture, even door knocks! I never knew this place existed. I looked at the sign on the wall and it read  Center for Hellenic Tradition Folk Art.  I could spend weeks here looking through Greek history. 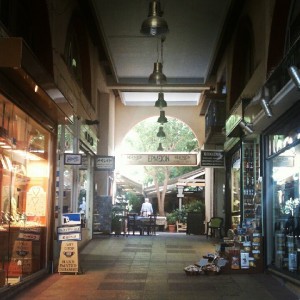 Finally we went to the cafe but it wasn’t just a cafe – it was like stepping into the Belle Epoque! Just the name – Orea Ellas (meaning beautiful Greece) had a golden glow to it. This is where I silently said to myself “Toto, we’re not in Kansas anymore”. This place was amazing. Marble tables with elegantly carved table legs made of bronze. Tasteful flowers on the tables, the sunlight gushing through the windows and the view! The Acropolis in its’ full majesty with an array of ceramic rooftops below. We just had coffee – Greek coffee of course – but I took a look at the menu. It was quite a selection – cheese pies from Crete, savory meatballs from Smyrne, smoked meat from Mani and a hearty selection of salads and desserts. I made a mental note of trying the vanilla submarine the next time I came. We met the owner – a delightful chap who looked more like an English nobleman than a Greek with his elegant silk scarf tie, his navy blue blazer and his snow white hair. He introduced himself as Mr. Panagiotis and we, of course, asked him to join us. Mr. Panagiotis was as gracious as he was distinguished and he proceeded to tell us the long and interesting story of the center and the cafe which is as long and adorned as the modern history of Greece.

I closed my eyes for a moment and tried to imagine this same street 200 years ago when its’ commercial activity was just beginning. I could hear the sound of horse driven carts and the shoe cobbler’s hammer. 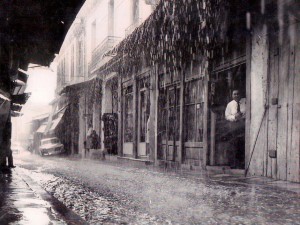 Taken in 1960 during a sudden downpour on Pandrossou Street.

He then gave us a guided tour of all three floors of the center including the rooftop which all I could say when I walked out was “Ah” when I saw the view of the Acropolis and then “Ah” again when I saw the Roman Agora.

Needless to say that we changed our plans completely and spent the better part of our day at the Kafeneion Orea Ellas and then strolling around the delightful Pandrossou Market Street where there was no end the new discoveries I made. I found wonderful clothing stores, specialty food stores, exquisite jewelry, ceramics, art galleries, t-shirt stores and the prices were refreshingly reasonable. It’s not just about the shopping it’s the experience and the people of Pandrossou that make the difference. But that is for another article. One thing’s for sure;  I will go back – again and again and again.