Carnival in Athens and Tsiknopempti 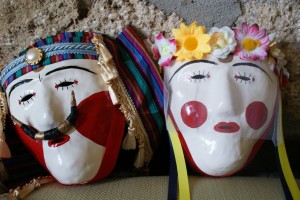 Greece is the country where two religions met and were also confronted. Paganism and Christianity. It is the place where Christianity was first acknowledged as the official religion of the country back in 313 AD. Paganism and its thousands of years practicing in Greece had a great impact on the new religion -Christianity- which adopted and incorporated a lot of pagan elements such as symbolism, ceremonies, rituals and celebrations.

Carnival or “Apokries” as the Greeks call it is a continuance or mixture of the pagan Dionysian Festivals held in Ancient Athens to honor God Dionysus, or Bacchus in Latin, who was the God of wine, vines and fertility. The Dionysian festivals were celebrated for the rebirth of the nature and fertility hence the processions that were held by which symbols of fertility were carried, such as phalli, baskets with dry fruit, loaves of bread, jars of water or wine. This was typically a time for the people to feel free and to let go of all inhibitions, formalities, values and restrictions and established laws. The followers of the God would race through the streets dancing wildly, banging drums, singing rude songs and uttering dirty jokes. This was done for two reasons; to banish harmful spirits and to wake up Mother Nature, to provoke her from the bowels of the earth to come back to life.

This is exactly what modern Greeks continue doing today with the Carnival celebrations, but they do combine it with the beginning of the Lent and the coming of Easter, one of the two biggest and most important Christian celebrations. 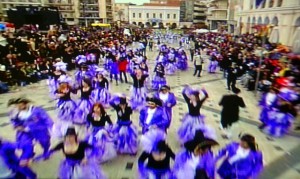 The Carnival season in Greece is also known as the “Apokries” (Greek: Αποκριές, “saying goodbye to meat”), or the season of the “Opening of the Triodion“, so named after the liturgical book used by the Orthodox Church from then until the Holy week. Apokries in Greece begins 60 days before Easter.
Apokries is a very interesting and important cultural tradition with social and spiritual symbolism.  Throughout the Carnival season, people disguise themselves as maskarádes (“masqueraders”) and engage in pranks and general revelry. If you happen to be in Greece at this time you should take advantage to celebrate it the Greek way. In most regions around the country, festivities of smaller or bigger extent are organized, focused on the reenactment of traditional carnival customs the city of Athens has street parties, bands, traditional music and other performances which take place in Plaka in the area around the Acropolis. 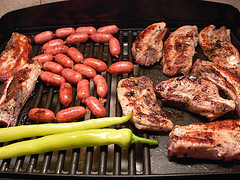 Grilled meat for a Tsiknopempti dinner. Photo by flickr, by Christina Cholidou

Fat Thursday (or Burnt Thursday), in Greek “Tsiknopempti“, is a traditional Christian feast marking the last Thursday before Lent and is associated with the celebration of Carnival. Because Lent is a time of fasting, the next opportunity to feast would not be until Easter. Most European Countries such as Germany, Italy, Poland, France, Spain & Portugal, do celebrate and honor meat and rich foods on this Thursday.

A few days before Lent begins, Greeks enjoy grilling and eating meat. This occurs on the Thursday of the second week of the carnival celebrations. On that Thursday, the so called “Tsiknopempti”, traditionally everyone must cook meat until the smoke or “tsikna” permeates the air so that everyone knows it’s a feast day. Thus, Greeks prepare themselves for the fasting period when they will refrain eating meat or dairy products. The following week, the last before Lent, is called “Tyrinē” (Greek: Τυρινή, “cheese week”), because eating meat is not allowed, but dairy products are. The Great Lent begins on “Clean Monday“, the day after “Cheese Sunday”. 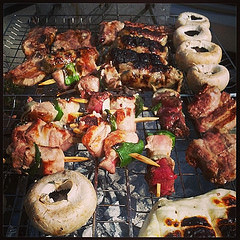 The carnival season marks the beginning of a two month period in Greece which is the most meaningful and mindful of all. It is a period where the carnal and the celestial are reconciled and combined. Beginning with the pagan rituals and Dionysian festivities for the Mother Nature to the pious spirituality of Lent and the culminating triumph of life over death, light over darkness on Holy Saturday and Easter Sunday.