Set amidst the historical and commercial centers of Athens, these three neighbouring areas, Monastiraki, Thissio and Psiri, are a hidden treasure, waiting to be discovered by the visitor.
A walk through each and every one of them will soon convince you that there’s so much more to discover than what initially meets the eye… 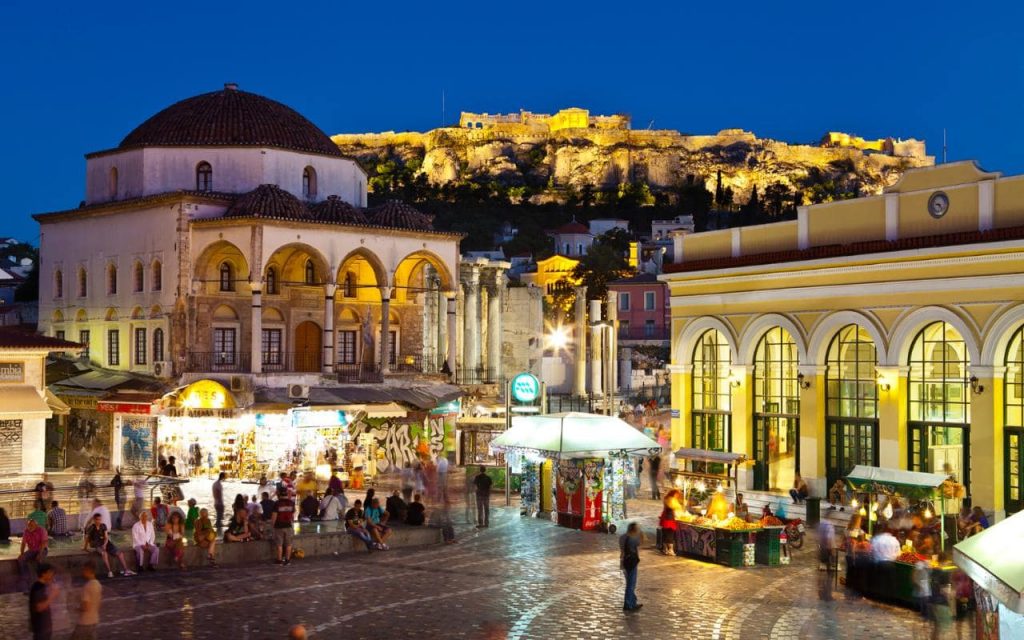 Let’s start our quest for the discovery of Athens’s hidden beauties by Monastiraki; the district whos’ borders are defined from the big Orthodox Cathedral of Athens (Metropolis), the picturesque old quarter of Plaka, Ermou str. and of course, Thissio and Psirri.

Walking down the lovely cobblestone alley called Ifestos that connects Metropolis sq. with Monastiraki sq., one cannot escape the feeling of carefreeness that seems to take whole of you, simply by observing ones’ surroundings: Small coffee-shops and, mostly, tourist shops, chairs set in the middle of the alley, so that the shop owners can seat and chat; Virginia creeper and bougainvillea dripping freely from the buildings.
On the second crossroad you will come upon, on the left, you’ll see the remains of the Roman agora. That’s when you realize that underneath the stones you step on, lies a history of over 3000 years! Men whose names remained known and honoured worldwide through eternity, such as, Socrates, Pericles, Aristotle and so many others, walked once the exact same path as you do now! 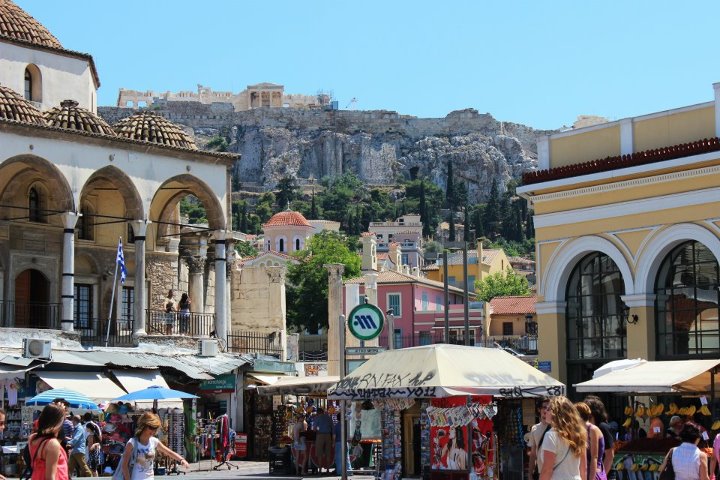 Arriving to the very centre of the Monastiraki quarter, Monastiraki square, you’ll feel like arriving to your appointment with history: The Square is dominated by the Metro station, built in 1895, initially to serve the connection between Athens and Piraeus port and expanded in the early 2000s to service yet another line, the one that connects Athens centre with the airport. In the process of building the metro, the diggings revealed a wealth of archaeological findings (buildings, workshops, graves, draining and watering pipes) that date back to the Mycenaean era (1600 – 1100 BC) as well as the riverbed of Eridanus river.
On the left of the metro station, stand the Tzistarakis Mosque (18th century AD) which today serves as annex to the Greek Folk Art museum and right next to it, Hadrian’s library (1st century AD). In the middle of the square, to the right, the small byzantine church of “Pantanassa” (Virgin Mary’s Assumption), remainder of the once existing Monastery which through the years gave its name to the entire area, thus “Monastiraki”.

Spend a few more minutes on the square, to enjoy the lively and often festive atmosphere and the mixture of people, as Monastiraki sq. serves as meeting point for both the Athenians and the foreigners. Street vendors selling fresh fruit or “koulouri” or cool coconut, usually crowded taverns selling greek kebab and coffee shops. Often you will encounter spontaneous street concerts of all kinds of music: reggae, indian, pop a.o. that add an even more celebrating touch to the atmosphere. 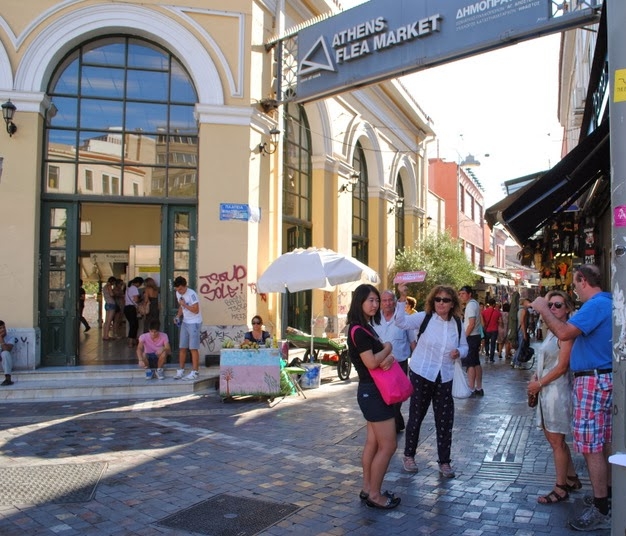 “Athens Flea Market” says the sign that hangs on the right of the Metro station and invites you to lose yourself in the numerous small shops selling beads, old vinyl records, CDs, funny looking trousers, shoes and further down, on Abyssinia’s sq., antiques. In the hidden corners and arcades of the Flea Market you will find even more shops and many bistros and coffee shops offering a pleasant break.
At the end of the street, on the right lies a treasure of literature hidden in the old bookstores.
On the left, next to the clearing around the small church of St. Phillip (9th century AD), surrounded by inviting cafeterias and taverns and separated by the train tracks from the picturesque remains of the Ancient Agora and Hephestus temple (also known as Thissio, due to the frescoes that decorate it), lies Adrianou street, which leads to Thissio quarter.

Past the train station of Thissio, the street widens pleasantly and the asphalt gives its way to yet another stone paved pedestrian road, Apostolou Pavlou.
If Monastiraki was meant to be the commercial centre of Old Athens, Thissio was always its most “elegant” neighbour.
Beautiful neoclassical buildings, cafeterias and lovely cosy taverns, lined up along the spacious promenade, offering marvelous view to the Acropolis hill.
Scattered along the way, joyful street vendors sell mainly handmade jewellery and hand crafted objects. 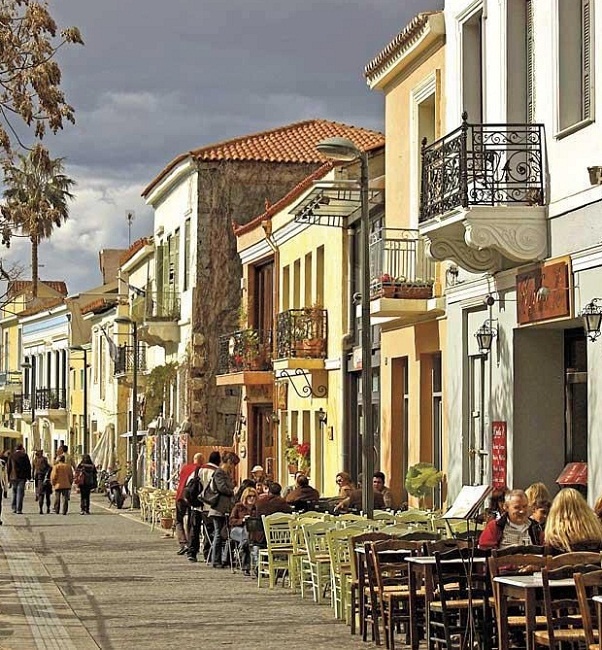 Thissio is another favourite venue for spontaneous, open-air concerts and happenings by street bands and this, combined with the fact that the area is considered as one of Athenians’ most beloved destinations within the city limits for a walk or a coffee break, makes the whole area an on-going party to celebrate the simple joys of life.
Visit the Herakleidon museum of physics, art and mathematics in Herakleidon Str., or the Islamic Art Benaki Museum or the Odeon Athenaeum, dedicated to the famous opera singer Maria Kallas; all three of them housed in beautiful neoclassical buildings.
After nightfall, Thissio will surprise the visitor with a large choice of bars and nightclubs. Worth mentioning is also the old, namesake open-air Cinema, which operates since 1935 every spring and summer and constitutes a unique experience for both Athenians and foreigners. 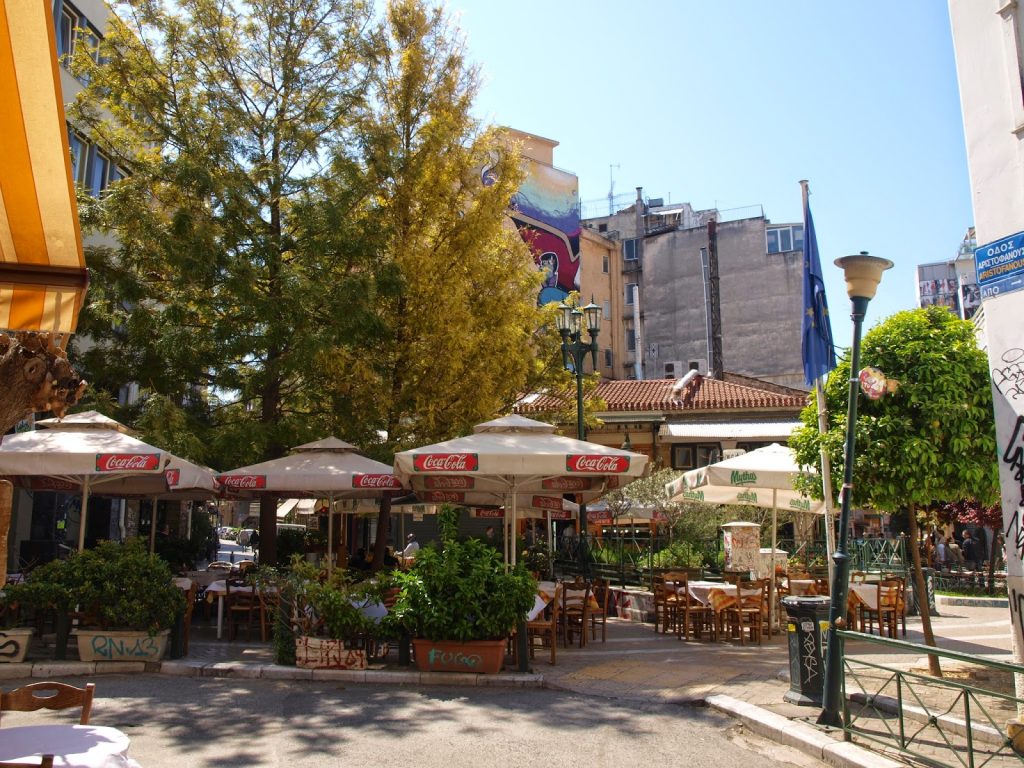 Psirri: the undoubtable mecca of cafes, bars, restaurants and ouzeri

Nevertheless, the undoubtable mecca of cafes, bars, restaurants and ouzeri is the, in first sight, humble Psiri (or Psirri).

Until the end of the 1900s, Psiri was a working class neighbourhood that was full of leather workshops, typesetters, fixtures, shops with material for making clothing. Some of them still remain, to remind the visitor of its primarily industrial and commercial use.
In the last years though, many of the old buildings have been renovated to bars, nightclubs, bouzoukia places, taverns or fine shops. Walking through the streets of Psirri in the morning, nothing apart from a couple ouzeri and cafes, can really prepare the visitor of the complete transformation to which this area undergoes at around 6 pm.

The streets are filled with tables and chairs. Each restaurant has its own motif: traditional Greek taverns next to cafes, in the 60’s style, all beautifully decorated mainly with old photos of Athens. The street party continues here, as the area is filled with music by the street musicians and also, the open doors of the nightclubs and bars: Latin, rock, main stream, ballads but foremost, the authentic Greek music, such as “rembetika”. If you wish to get away from all touristy and experience the true nightlife of Athens, this is the right place to be!

The knowledgeable and licensed tour guides of Athens Walking Tours would be happy to put together a custom made tour for you that would include the Monastiraki district, the Athens Flea Market and of course the vibrant Psirri area. Or just visit them on your own after your Acropolis Tour or the Athens Food Tour.