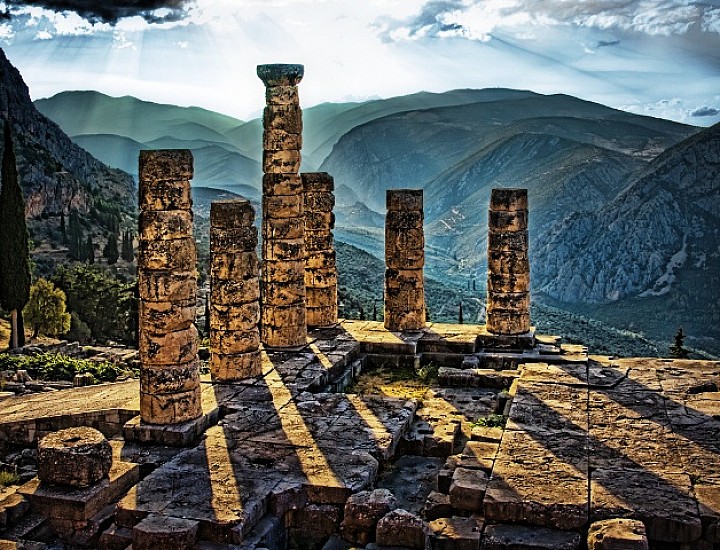 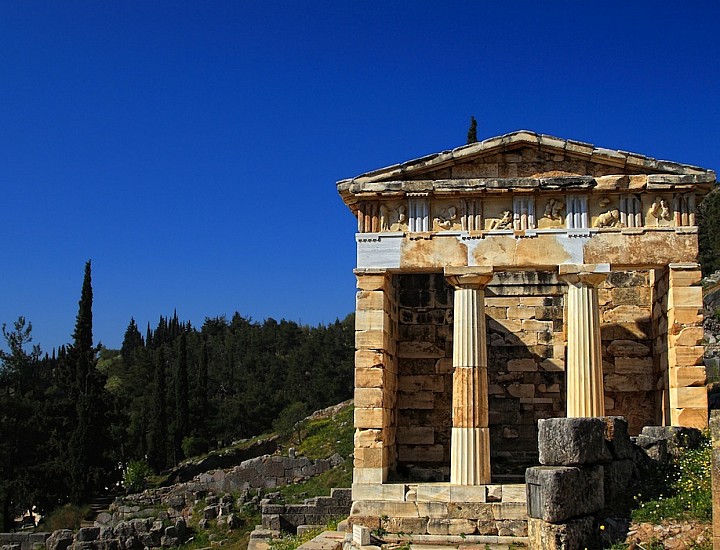 * During WINTER we will be offering only FIRST CLASS accommodation for this multi-day tour on Mondays upon request and specially reduced prices will apply.

Morning departure from Athens, through Thebes, with two short stops at Levadia and Arachova and arrival at the archaeological site of Delphi around noon. Known as the navel and for some the universe, Delphi was of major importance and of considerable wealth in antiquity due to its famous oracle. Visit the Temple of Apollo, and the Archaeological Museum of Delphi where the famous bronze statue, The Charioteer, the Naxian Sphinx and the statue of Antinoos are exhibited. You will also pass by the Castalian Spring, considered sacred in the ancient world and where the visitors of the Delphi Oracle always stopped to wash their hair. In the afternoon you will visit the archaeological site of Delphi. You will have a FREE afternoon and overnight stay in Delphi.

You will have the morning FREE to explore. In the afternoon your tour will continue to Kalambaka, a town built at the foot of the majestic Meteora Monasteries. Overnight stay in Kalambaka.

Morning departure for the World Heritage Site of Meteora and the Byzantine Monasteries perched on top of the sandstone cliffs where visitors will be awarded a birds eye view of the fertile plains below. The monasteries or holy fortresses were inaccessible for years to the outside world and provided a secluded sanctuary for monks. Meteora is considered one of the most unique attractions and beautiful areas of mainland Greece. An optional visit to a Byzantine style icon factory will be on the program if you so wish to visit. On the return journey back to Athens you will pass by Thermopylae, the monument of the heroic King of Sparta, Leonidas, whose massively outnumbered army defeated the mighty Persians from invading Greece. A short photo stop follows. Arrive in Athens by late afternoon.

This is a HB tour. Lunch is not included, only breakfast and dinner are included.

This tour starts at 08:30 and is operated* between April and October every Tuesday, Wednesday, Sunday and Fridays on specific dates.

There is a pick up service from most centrally located hotels.

If you require a pick up service please advise us at the comments' section of your reservation and you will receive directions and pick up time by email.

The tour will finally start from the coach terminal. If you decide to make your own way to the coach terminal you should be there approximately 15 minutes before the indicated time of departure. Call us at +30 210 8847 269 for directions!

All entrance tickets are included in the price!

* During WINTER we will be offering only FIRST CLASS accommodation for this multi-day tour on Mondays upon request and specially reduced prices will apply.