Pnyx: The oldest parliament of the world 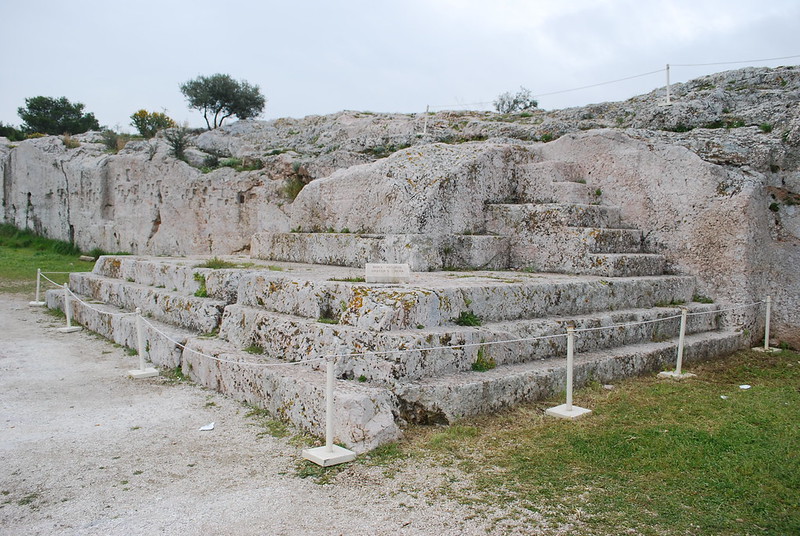 People should feel lucky and proud visiting Athens, the Greek capital, a place that pioneered the creation and development of Western culture. It is the city that gave birth to democracy, philosophy, theatre, and many other values that constitute "Western culture" today. One can follow in the footsteps of great men of philosophy such as Socrates and Plato, sit on 2500 years old theatre seats where works of poets such as Aeschylus and Aristophanes were performed, and walk in the place where Democracy, the greatest of all government forms was born. This place is Pnyx, a hill west of the Acropolis, that we can call, the first and oldest Parliament of the world; the place where Democracy was developed and practiced for the first time in history.

The Pnyx is worth your visit

It is highly recommended while in Athens not to miss Pnyx Hill; it is located about 1 km west of the Acropolis and is one of the most important sites in Athens. You may visit it on your own, but you can also book a private customized tour with one of the highly qualified, licensed tour guides of Athens Walking Tours, learn all about the history and better comprehend the significance of these top historical sites. Apart from its historical importance, Pnyx hill offers splendid views of the Acropolis, the surrounding mountains, the port of Piraeus and the city itself. To get there you may take the beautifully paved walkway that begins at the junction of Dionysiou Areopagitou and Roberto Galli street. Once you see the small church of Aghios Dimitrios, turn right to reach the Pnyx plateau.

History of the Pnyx

The Pnyx was the official meeting place of the Athenian democratic assembly that was first held in the Agora at the foot of the Acropolis, and which was moved to this hill west of the Acropolis in the early 5th century.  This new meeting place came to be called "Pnyx" (from the Greek word meaning "tightly packed together").

The hill's capacity was 6.000 to 10.000 people. They sat on the ground or brought portable seats with them. Only Athenian citizens had the right to participate, and they had to be over 18 years of age. In the beginning, it was a plateau with a retaining wall in the North, still visible today.

The principles of Democracy in Ancient Athens

2.500 years ago, Pnyx Hill hosted the popular assemblies of the Athenians; it was the time when Athenians conceived the idea of Democracy and started practicing it, based on three principles: 1) Isēgoría (Greek: ἰσηγορία), which literally means "speech equality", i.e. the equal right of every citizen to speak their mind. The formal opening of the assembly always started with the question, "Who wishes to speak to the Popular Assembly?", announced by the assembly officer, 2) Isonomía (Greek: ἰσονομία), which means that all citizens are equal under the law, and 3) Isopoliteía (Greek: ἰσοπολιτεία), which means that all citizens had the right to vote and also had the same opportunities to assume political office.

Places of interest on Pnyx Hill

The Orator's Bema: A three-stepped stone construction, the stand from which the speakers addressed the assembly. The original use of the bema in Athens was as a tribunal from which orators addressed the citizens as well as law courts. The greatest political struggles of Athens during its golden age were fought at this site. Great politicians, as well as orators, such as Pericles, Aristides, and Alcibiades spoke there.

The Altar of God Zeus Agoraios: An altar of Zeus of the Agora, originally erected at the end of the 4th century on the Pnyx, and relocated in the first century BC to the Ancient Agora, where one can still see it today.
Niches for votive plaques from Zeus's Hypsistos  sanctuary, Photo by nath&mag, flickr
The Sanctuary of Zeus Hypsistos: On the eastern side of the Bema, there are foundation stones belonging to a sanctuary dedicated to Zeus, located there in the Roman period.
Meton's solarscope, which can be found west to the altar of Zeus, is the oldest known astronomical observatory, where the mathematician and astronomer, Meton of Athens, performed several of his measurements. You can also see the modern observatory of the city located a few feet above Pnyx Hill.
By Despina Savidou, Co-Founder of Athens Walking Tours and Licensed Guide

Wonderful curated tour of local Greek food.  The short review is that this was very much worth the time and money. There's plenty of walking, plenty of sights seen, and plenty of good food to sample.

Above and beyond just a food tour. We enjoyed the tour immensely and we highly recommend it for anyone visiting Athens.

Great introduction to Athens off the beaten path.  What an experience. It was way beyond what we expected both in variety and amount of places and great food.

Perfect way to see the acropolis. Having a guide at the acropolis is an absolute must if you want to understand the context of everything.This tour was perfect. Great pace and insights.

Come with an empty stomach. This tour is awesome all thanks to Georgia who brought her bubbly and energized spirit the whole time. Georgia did it not even stop to catch a breath, walking and explaining Greek culture and way of life, from breakfast, lunch, dinner to how to drink and enjoy ouzo and tsipouro

Great guided tour around the Acropolis! This is without a doubt a must do while in Athens. The tour was filled with intersting facts about ancient greek history, perfectly explained by our amazing tour guide Dorina. I highly recomend it if you want to really enjoy visiting the Acropolis and understanding what those ancient stones trully mean.

Great private visit to Acropolis ...Given that we would probably have spent the day sitting an an airport hotel otherwise, I'm very glad that I reached out to Athens Walking Tours, as we were able to see such an amazing site and do it with a knowledgeable guide and a good plan that kept us out of the heat.

5 star cooking class! We enjoyed a 7 course cooking class, dinner and wine with our chef-host Sophia Faloutsou. She was informative, entertaining, and encouraging throughout our 4 hour time with her.

Unforgettable tour! This is without a doubt a must do while in Athens. The tour was filled with intersting facts about ancient greek history, perfectly explained by our amazing tour guide Dorina.I highly recomend it if you want to really enjoy visiting the Acropolis and understanding what those ancient stones trully mean.

Stories and history of the Acropolis ...She had many stories and a lot of knowledge about the Acropolis and the different significant sites leading up to it. She was friendly and concerned for everyone's safety, and was happy to answer any and all questions.

Perfect tour in every way! This was a perfect tour! Our enthusiastic guide, Sissy, knew all about the archaeology and history! She connected Greek mythology with our modern time, and helped us appreciate our shared humanity.

Accommodating, interesting, and fun! ...The difference between doing this site without a guide and with a guide is completely different. Well worth the money. Understood so much more than I would without a guide.

Morning Walking Food Tour This is an amazing company. In fact, company is not the right word. They are family right from the start. Alexandra took care of me from the moment I made my first reservation. Due to covid and all the new restrictions, things were up in the air a bit but she was right there making sure I didn’t miss a thing. ...I’m so thankful I booked with Athens Walking Tours. I look forward to my Acropolis tour tomorrow!!