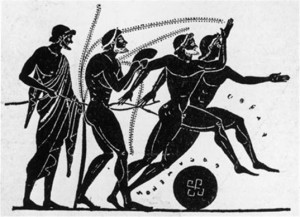 The Olympic Games began in Greece as early as 776 BC. They were dedicated to the Gods of Olympus and held every four years at the ancient site of Olympia, an area of unique natural and mystical beauty and they continued for 12 centuries until the Byzantine emperor Theodosius considered them “pagan rituals” and banned them. They began again where they had stopped, in Greece, in 1896.

The Ancient Olympic Games were linked to religious festivals but were also secular in nature as well and aimed to highlight and promote ideals such as fair play, good sportsmanship the harmonious balance of body, soul and mind as well as encouraging good relations between the city states of Greece. These ideals have remained intact till today to a satisfactory degree.

If you want to learn more about the Olympic Games then sign up for an Athens Walking Tour and your guide will give you even more insight as you pass by the Panathenaic stadium!

I was lucky enough to be in Athens in August of 2004 to witness the once in a lifetime event up close. I was amazed at how the Olympic Ideal had seemingly transformed everyone I encountered.  Every Athenian that I met was helpful, friendly, enthusiastic and bursting with pride and hospitality. The organization was impeccable and the opening ceremony remains to this day one of the most impressive to date.

This year, once again, people from every corner of the Earth have gathered to play for gold, silver and bronze and to put their physical and spiritual endurance to the ultimate test. It is also an opportunity for cooperation between races, religions and ideals which yesterday may have had tremendous differences but today and for as long as the Olympic flame burns, there will be peace, friendship and fair play in the land.

And for me, the fact that this ideal, created by the Greeks in 776 BC, can survive in the hearts of men and women until today is a very, very promising message for mankind!