The Sacred Athena Olive Tree on Top of the Acropolis

If you have been in Greece you have seen an olive tree. If you have driven through the Greek countryside you have seen breathtaking vistas of endless olive groves. Hopefully, you have noticed how their silverish green shimmer in sunlight and how the wind rustles through the branches. And if this picture has a backdrop as stunning as the blue-green Aegean sea, well then you have a masterpiece.

The olive tree has been considered sacred by Greeks for thousands of years. In Greek mythology, it was the sacred tree of the goddess Athena and Athens. It makes our food, our history, and our lives that much more enriched. It is part of Greek life.

Here is everything you need to know about how special the olive tree is to the Greeks.

The olive branch is a sign of peace, and when made into a wreath it is a trophy for victorious Olympic athletes. It was an olive branch that Noah’s dove carried in its mouth signifying the salvation of life on earth.

The History of Olive Tree Athena at the Acropolis 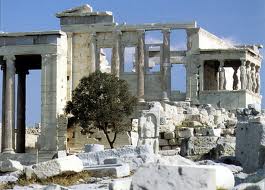 If you are in Athens and visit the Acropolis you must stop and see this sacred Greek olive tree, which is located by the west porch of the Erectheion.

Legend says that the olive tree can be traced back to the original olive tree that was planted by the Goddess Athena herself. The famous ancient Greek geographer and traveler Pausanias, who spent his life chronicling the major events of the 2nd century AD stated that the day after the Persians burned down the Acropolis in 480 BCE, this sacred olive tree sprouted a new branch over four feet long.

Invaders have come and gone since then and the tree has suffered many fires and mutilations. But a sprig was always saved to be planted later. The most recent planting was done by members of the American School of Archaeology in 1952 who saved and harvested a branch from the destruction of the Germans during World War II.

The Olive Harvest in Greece 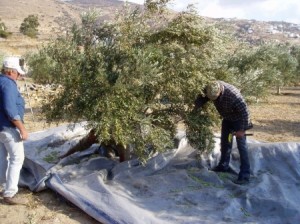 During the olive harvest, which in Greece begins in October and lasts until early December in some areas, families and friends gather to collect the season’s bounty.

The olive tree is resilient to wind and severe temperatures. It can survive virtually anywhere. It needs little water or care to produce olives. Occasionally it will require some pesticides (more and more farmers are turning to organic solutions).

The use of olive trees

Nothing is ever wasted from the olive tree. The fruit is pressed for its golden oil which is consumed raw or cooked and is a staple of Mediterranean cuisine. The oil is also used for various cosmetic purposes.

Even the olive pit is pressed and that oil is used for oil lamps and in the production of soaps and detergents. And finally the branches which are cut at the end of the harvest for pruning are used as firewood, a Greek tradition.

reek olive oil is considered to be of superior quality and Greece is the third largest olive oil producing country worldwide after Spain and Italy.

Many shops, both in Greece and abroad, are now offering olive oil tasting events which are similar to wine tasting.

This is a fascinating activity to participate in because in a very short time you can taste the best olive oil from the most famous oil producing regions and varieties. Many farms around also provide the opportunity to participate in the olive harvest giving visitors hands-on knowledge of how olive oil is produced and many of them will also offer you a bottle or two of the olive oil that you helped to produce with your own private label.

Learn more about Greek olives on our food tour

You can learn much more about olive oil and participate in an olive oil  tasting on the Athens Food Tour. Also let us know if subjects such as olive oil and Greek cuisine interest you and we will post more articles on the subject.