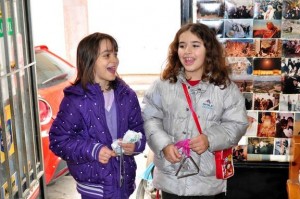 One of the most beautiful Christmas Traditions in Greece are the traditional Christmas Carol rounds that are performed and sung usually by children. Tradition calls for the children to go from house to house on the eve of the three main Christmas holidays, Christmas, New Years and Epiphany, and sing carols or calanda by their Greek name. At sun up they begin ringing door bells and sleepy folk from all corners of Greece are greeted by rosy cheeked young ones bearing triangles, guitars, accordions or harmonicas and singing their hearts out and asking the master of the house “Na ta poume?” which means in Greek “Shall we say them?”. If the homeowner says yes then the children begin to sing and play their carols always finishing in the end with a wish “And for the next year, many happy returns.” 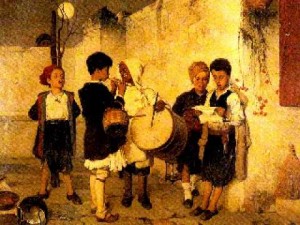 The painting on oil canvas “Carols” by the Greek artist Nikoforos Lytras 1872. The painting is found in a private collection.

In older times the children were given sweets, dried fruits and nuts as thanks for their songs and wishes. Today most people give the children money but I personally stick to the tradition of giving the children a homemade melomakarono, kourabie or thipla which are the traditional Christmas sweets offered.

The word calanda derives from the Latin calends and translates to “the beginning of the month.”  The history of Greek calanda reaches as far back as ancient Greece and amazingly enough some of the carols have little changed. Some verses from the Homeric period can still be heard in traditional calanda from Thrace.

It is traditions such as these that remind me yet again how special it is to have a connection to such a rich heritage and every year when I am in Greece for the Christmas holidays I look forward to the ringing of the bell.

This entry was posted in Athens News, Culture & entertainment, Uncategorized. Bookmark the permalink.