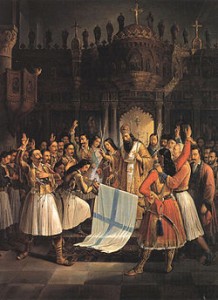 Bishop Germanos raises the flag of the Greek Revolution

Apart from the array of streaming blue and white and the parades, what I liked best about the Greek Independence Day (March 25) were the stories of heroism and of an unequal fight for freedom against all odds. 400 years of Turkish rule came to an end beginning in the year of 1821 and finally ended in 1832. It was on March 25, 1821, that the Bishop Germanos of Patras raised the Greek flag at the monastery of Agias Lavras and inspired thousands of his fellow countrymen to take up arms against a cruel oppressor. “Eleftheria i Thanatos” he roared. Freedom or Death, from now on there is no other choice.

Every time I would hear this story as a child it always made my hair rise. As if it was yesterday I remember standing in my white tights and saddle shoes on the creaky wooden stage of the Annunciation Greek Orthodox Church in Columbus Ohio reading my poem for Greek Independence Day. At the end, we would sing the Greek national anthem and my little lungs would swell with pride. 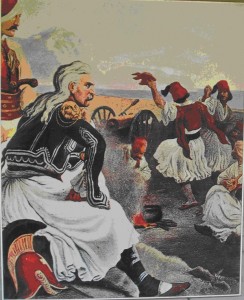 Theodore Kolokotronis – the father of the Greek Revolution- with his men.

I also remember another story that our Sunday school teachers would tell us about Theodoros Kolokotronis – the commander in chief of the Greek forces in the Peloponnese and the father of the Greek Revolution. He was an outlaw on the run. His forces slept in the mountains under the thick shade of oak trees by night and fought for freedom by day. Before leading his men into battle he would take off his ancient Greek helmet, place it on the ground by his feet and dance heroic Greek dances with his men.

These seemingly insignificant little memory reels from my childhood played a very important role in how I identified myself as a Greek-American. It helped me to understand my roots, and parts of my history. It made me feel part of a community, a community that I was proud to be a part of. 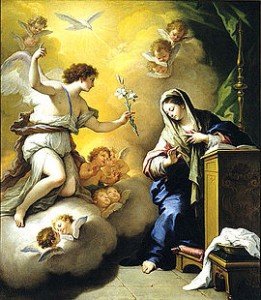 Archangel Gabriel announces to the Holy Mother that she is with child.

March 25 is also the feast of the Annunciation when the archangel Gabriel appeared before the virgin Mary and informed her that she was with child and not just any child but with the son of God. Perhaps this was the reason that the Bishop Germanos chose this important religious holiday to herald the news of a new life of freedom for the Greek people.

The Greek Orthodox religion recognizes this day as a feast day and although it is a period of lent, the consumption of fish is allowed and so the customary dish is fried salted cod with garlic sauce. It is absolutely delicious.

I do not agree with the exceptional Janis Joplin that freedom is just another word for nothing left to lose. Freedom is everything and only those that have lost it can understand its true significance. For those of us living in a free world let us never take it for granted. Many will debate on whether any of us actually do live in a free world anymore. I think that it is up to us to decide on how bad we want it. Let us not forget that freedom is not a given. It is something that we should strive for and defend every day.