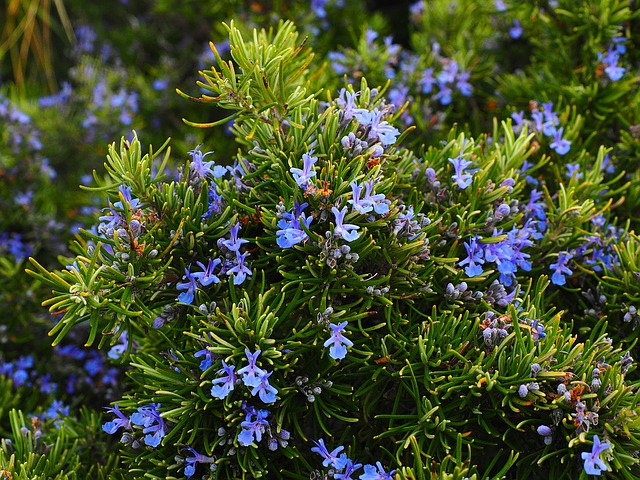 The Mediterranean climate of Greece is not ideal only for holidays, but it also helps the earth to give birth to unique herbs. The majority of them are appreciated since ancient Greece for adding taste in our meals, heal us and protect us naturally.

How do contemporary Greeks use them while cooking? Let’s find out!

Have you ever found yourself wondering around the dry and rocky sights of the Cycladic islands? Well, the smell of oregano is then familiar… It grows on its own, it does not need water and its smell is so characteristic that one could not confuse it with another herb! Since it is so easy to find, Greeks use it a lot on the well-known horiatiki (Greek salad), on red meat and fishes!

Marjoram belongs to the Oregano family and they look alike. It has a lighter flavor and it is used for cooking purposes as well (meat, fish, soups).

This herb is used in many countries of the world, but Greeks really make the most out of it! You can find it in salads and in the famous spanakopita (spinach pie). In Ancient Greece though, its purpose was medical, to promote sleep and also, to flavour wine!

Fennel belongs to the dill family and has an anise flavour which helps us to distinguish it. It is used in savory foods and it took its name (Marathon in Greek) by the area of Marathon in Attica where the Spartans defeated the Persians (49 BC). It is said that the battle took place in a valley fool of fennel!

Oh, the mint! It smells so wonderful and many companies have tried to copy its essence (from chewing gums to perfumes and cigarettes!). In Greece, we use it in pies and we also drink it as tea!

Rosemary belongs to the mint family and it is used as an antiseptic. It matches perfectly with chicken in the oven with potatoes!

In other words, the Greek mountain tea! Oh, we love it and of course, it grows on the majority of the mountains. It has an exceptional taste and it is helpful in case of stomach aches!

This pretty little flower grows all around Greece! Its smell is so pure and calming… Greeks use it in cosmetics and also as a tea to relax.

This elegant herb is also used in cooking. It is one of the few herbs which will retain all its flavour when dried and is one of the herbs used in Bouquet Garni, a bundle of herbs, tied together and used to flavour savoury dishes. Its oil is an effective mouthwash and antiseptic. As a tea, it helps coughs and bronchitis.

Very little doesn’t benefit from parsley, sauces, stews, cheese, fish, and of course, as a garnish and most of the time, it is fresh!

Join us on our Cooking Lesson to have a hands-on experience with the Greek gastronomy or follow us on our Food Tour to have an urban adventure full of tastings, flavours and colours!

Perfect way to see the acropolis. Having a guide at the acropolis is an absolute must if you want to understand the context of everything.This tour was perfect. Great pace and insights.

Come with an empty stomach. This tour is awesome all thanks to Georgia who brought her bubbly and energized spirit the whole time. Georgia did it not even stop to catch a breath, walking and explaining Greek culture and way of life, from breakfast, lunch, dinner to how to drink and enjoy ouzo and tsipouro

Great guided tour around the Acropolis! This is without a doubt a must do while in Athens. The tour was filled with intersting facts about ancient greek history, perfectly explained by our amazing tour guide Dorina. I highly recomend it if you want to really enjoy visiting the Acropolis and understanding what those ancient stones trully mean.

Great private visit to Acropolis ...Given that we would probably have spent the day sitting an an airport hotel otherwise, I'm very glad that I reached out to Athens Walking Tours, as we were able to see such an amazing site and do it with a knowledgeable guide and a good plan that kept us out of the heat.

5 star cooking class! We enjoyed a 7 course cooking class, dinner and wine with our chef-host Sophia Faloutsou. She was informative, entertaining, and encouraging throughout our 4 hour time with her.

Unforgettable tour! This is without a doubt a must do while in Athens. The tour was filled with intersting facts about ancient greek history, perfectly explained by our amazing tour guide Dorina.I highly recomend it if you want to really enjoy visiting the Acropolis and understanding what those ancient stones trully mean.

Stories and history of the Acropolis ...She had many stories and a lot of knowledge about the Acropolis and the different significant sites leading up to it. She was friendly and concerned for everyone's safety, and was happy to answer any and all questions.

Perfect tour in every way! This was a perfect tour! Our enthusiastic guide, Sissy, knew all about the archaeology and history! She connected Greek mythology with our modern time, and helped us appreciate our shared humanity.

Accommodating, interesting, and fun! ...The difference between doing this site without a guide and with a guide is completely different. Well worth the money. Understood so much more than I would without a guide.

Morning Walking Food Tour This is an amazing company. In fact, company is not the right word. They are family right from the start. Alexandra took care of me from the moment I made my first reservation. Due to covid and all the new restrictions, things were up in the air a bit but she was right there making sure I didn’t miss a thing. ...I’m so thankful I booked with Athens Walking Tours. I look forward to my Acropolis tour tomorrow!!

Premium experience for a premium tour! I had a wonderful time going on this tour with Despina. She has a certain verve and passion when explaining and discussing the historical elements from the sights that made you feel that you have travelled back in time and made the experience feel alive, while at the same time dispelling some of the beliefs I've had for a long time about the Acropolis! There was enough information without it feeling like a boring history lesson, and I appreciated the balance.

Shahab A | May 21 | Acropolis Premium Tour

History comes alive  "Our wonderful and knowledgeable guide, Despina, taught us so much!! Due to Covid we had a unique experience to see and learn In an environment free of crowds. I would totally recommend this tour without hesitation. The Massey family"

Awesome tour Very knowledgeable and thorough. Would rate as one if the BEST tours we’ve experienced! Brought history to life!