Insta-Athens: Part I of III 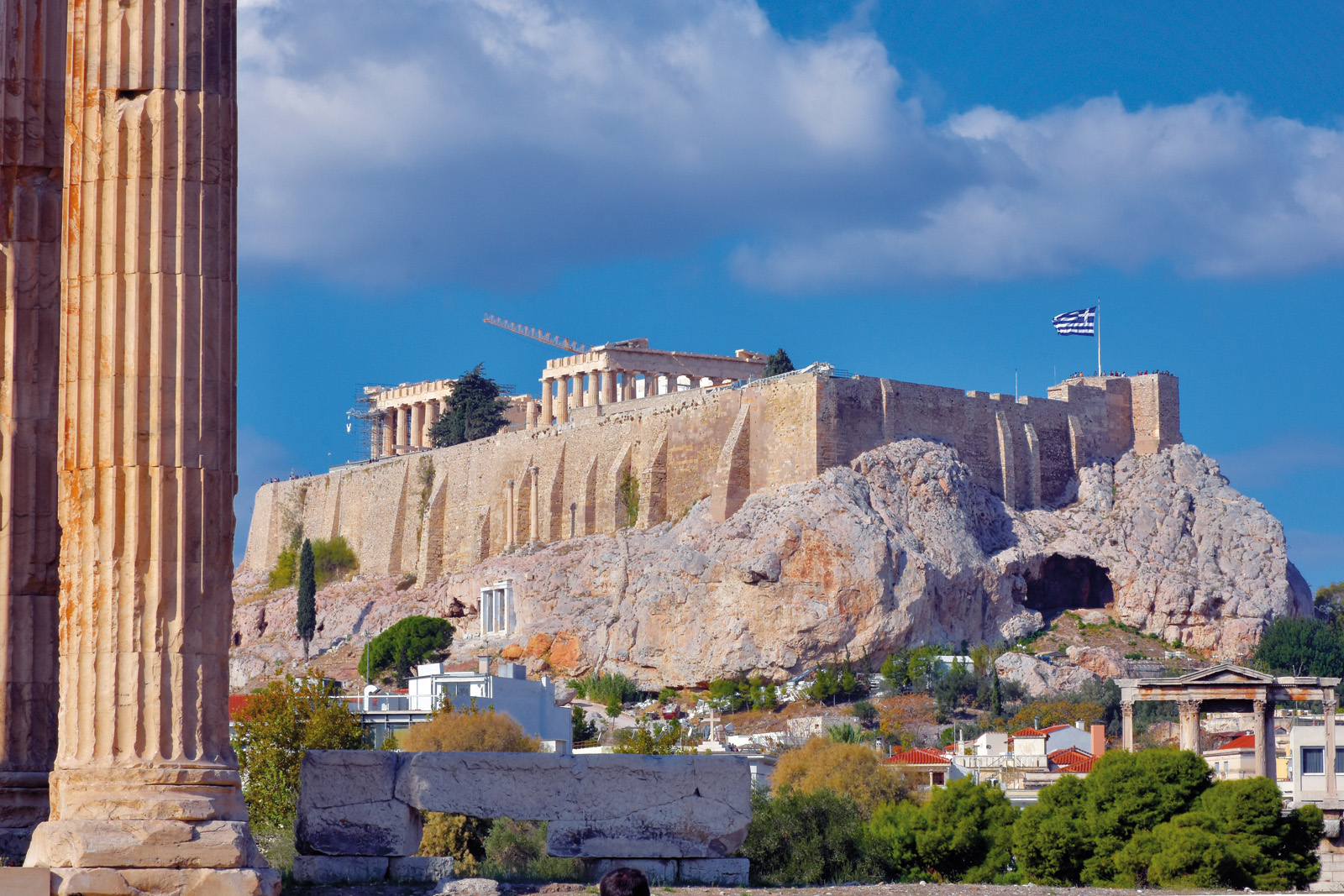 It is late in the afternoon. The light is mild and beautiful as the sun will soon start to set, you are wearing a long, floral summer dress, your hair slightly blowing in the breeze, and behind you emerges a 2500 years old ancient temple of remarkable architecture.  Can you think of anything more alluring for your Instagram page? A few clicks, a quick upload, a bit of filtering, and followers go wild.  Athens, being an amalgamation of history and modernity has many scenic locations to capture. What are you waiting for? Take your camera and start shooting:

Whatever you do, do not miss Acropolis hill. The most iconic site in Europe lies right at the center of the city and contains fascinating historical sites such as the breathtaking Parthenon, the temple of Athena Nike, and of course the Erechtheion with the famous Caryatides, female statues that served as supporting columns. For a complete visit to the sacred hill, choose wisely and book the Acropolis tour with one of the knowledgeable, licensed guides of Athens Walking Tours. You can prebook and save lots of time for some of the most amazing shots on your page.  Don’t forget that early in the morning there are fewer crowds and less heat.

Halfway up the Acropolis, you will come across the Odeon of Herodes Atticus, or Herodion.  Built during the Roman period by the prominent and very wealthy Herodes Atticus as a gift for the Athenians, it is luckily still in operation today.  Many world-renown artists like Maria Callas, Luciano Pavarotti, Frank Sinatra, and Greek-American composer Yanni have performed at the Herodion (Florence and the Machine was also here recently), and trust me, a Herodion concert is not something you would want to miss. Having the Acropolis lit above you while listening to your favorite singer creates an idyllic, almost spiritual atmosphere. Now for an insta-perfect shot, it is best to visit around midday to avoid very harsh light. The theatre is not open to crowds, but our Athens Walking Tours guides climb from the south slope and have the chance to see the theatre from up close and you can get some very particular shots.  An amphitheatric shot from the Acropolis, having the Odeon’s arches in the background is worth it, believe me. 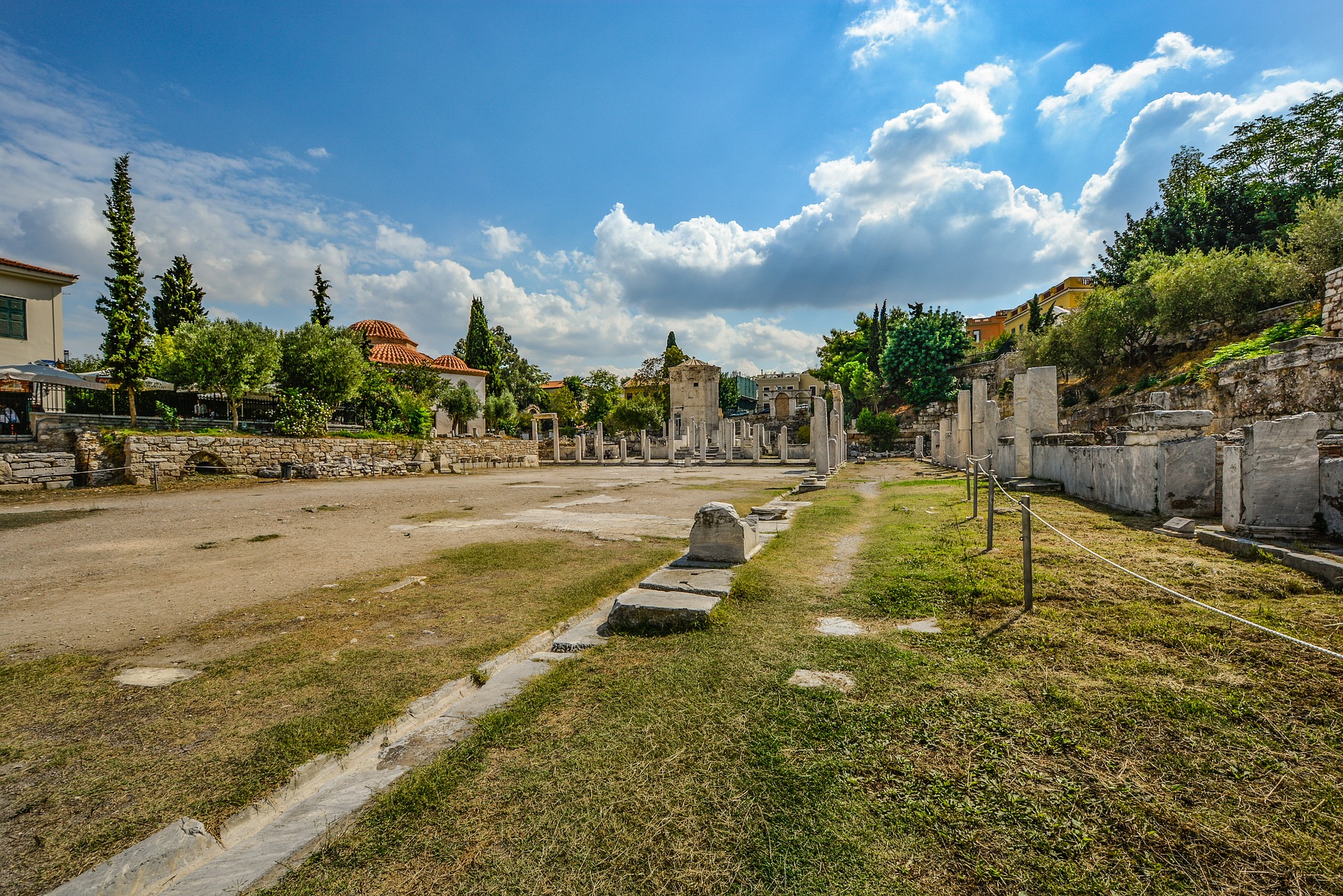 The Ancient Agora was the commercial, the financial, and the religious center for Ancient Athenians; a place where people would gather to do their shopping, meet friends, talk politics, and listen to philosophy lectures from Socrates, Plato, or Aristotle. There are many locations inside the Agora to get inspiration like for instance the impressive Stoa of Attalos (a roofed walkway with columns), a stunning building that we could say was the first shopping mall of the ancient world. The architecture of the Stoa can make a very beautiful canvas for creative shots. Early in the afternoon, you will catch the best light with some interesting shadow play. Again do not forget to book an early ticket and save time for more pictures. 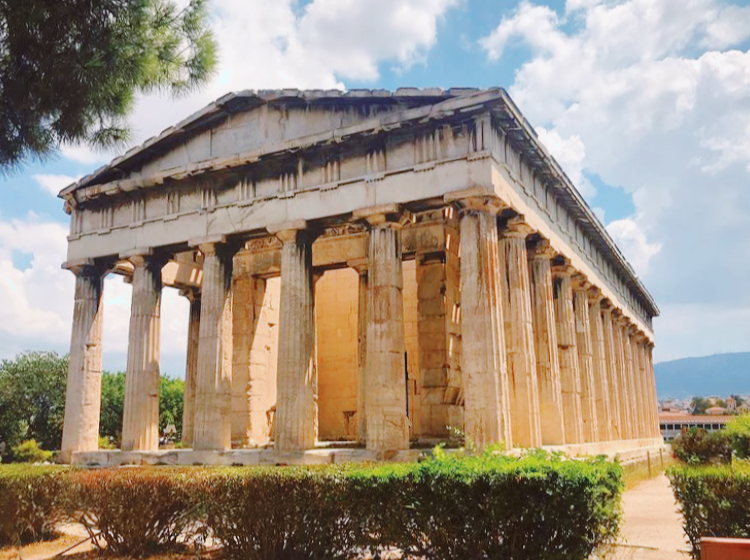 Within the Ancient Agora close to Monastiraki, you will find the Temple of Hephaestus, dedicated to the fierce Greek god of fire. At first, it was mistakenly thought to be dedicated to Theseus, the Greek hero, and that is why the district around it was named Thiseio. Thiseio is another very picturesque area with neoclassical buildings, museums, and many coffee shops and restaurants. This has many Jewish residents and a large Synagogue at Melidoni Street.  Moreover, a Holocaust Memorial was set up a few meters from the Synagogue in 2010. Hephaestus Temple is the most well-preserved temple in Athens because the Church managed to save it from destruction during the Ottoman period by turning it into an orthodox chapel. The temple is beautiful for that perfect geometrical shot, and especially in spring with trees in full bloom and flowers all around, it is one of the most scenic spots in Athens. Don’t forget to prebook for your tour! 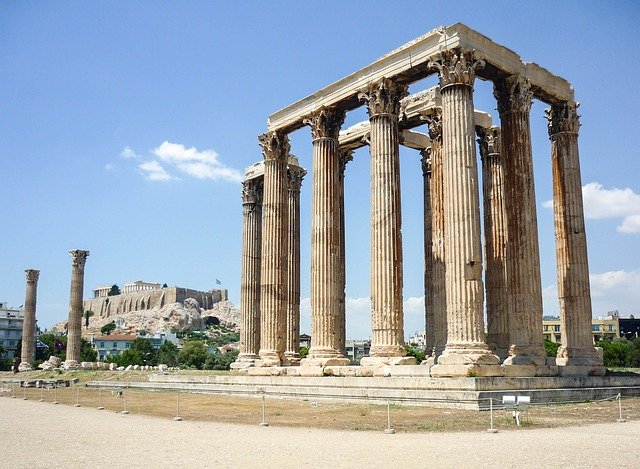 Inside a park, southeast of the Acropolis lies an impressive array of colossal well-preserved columns. This is what is left of the Temple of Olympian Zeus or Columns of Olympian Zeus as it is known today, once dedicated to Zeus, father of the Olympian gods. Its construction started in the 6th century BC but it was never completed until the 2nd century AD by Emperor Hadrian.  Here you will find fewer people than the Acropolis, which makes it ideal for crowd-free pictures. The temple used to have over 100 columns, with only 15 still standing today, however, it remains quite daunting and you can definitely use it for some very impressive shots. Of course, you can prebook, and please note that entering the Temple with the Athens Walking Tours guides also gives you the benefit of some more amazing shots of the Acropolis from afar. 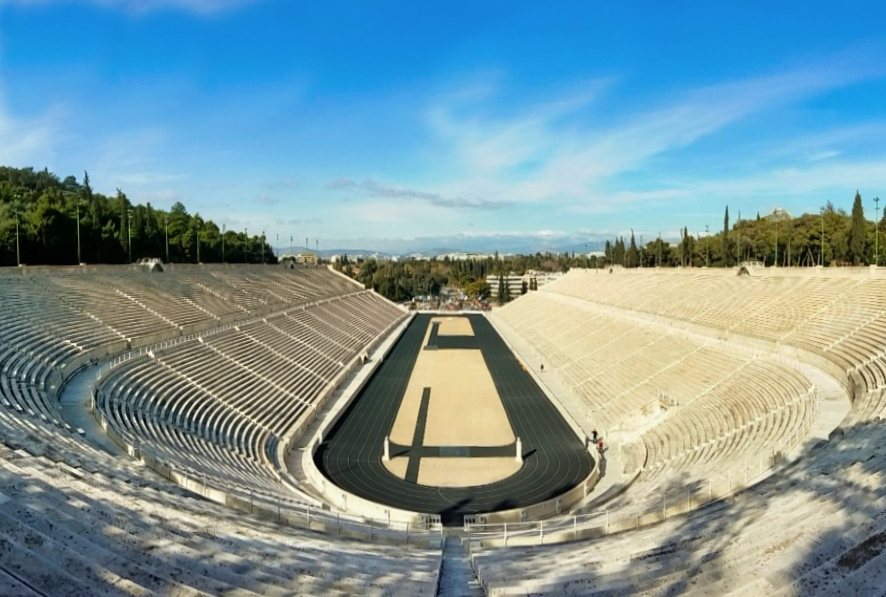 The stadium is located in the heart of Athens, just a few hundred meters from Syntagma Square and the Columns of Olympian Zeus. The Panathenaic Stadium or Kallimarmaro as it is known (a compound word meaning beautiful marble in Greek) is very emblematic for Athenian history, as it was the first stadium worldwide to host the modern Olympic Games. Are you instaready to capture one of your most impressive shots? The view from above lets you overlook the symmetry of the racetrack and the whole structure, with parts of the city in the background. Book now and enjoy a private skip-the-line (and crowds) tour. 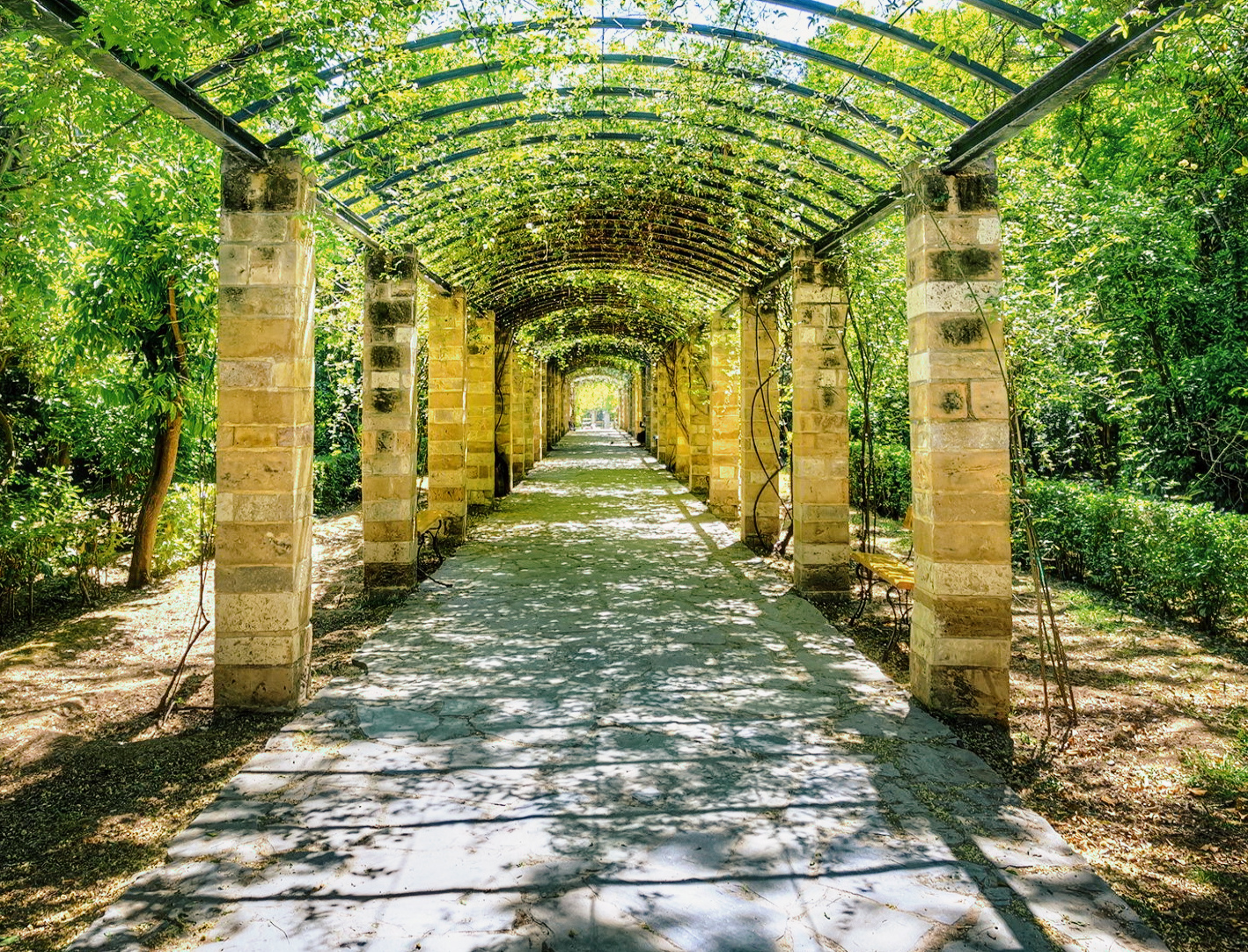 Every city has a National Park and Athens is no exception.  Build by Queen Amalia in 1840 (yes, Greece used to have a King and a Queen), but opened to the public only during the 20th century, it is filled with winding paved paths, duck ponds, beautiful statues, and of course trees, plants, and rare flowers from the whole world, all imported on royal command. You can find palm trees, purple Jacarandas, and even parrots sitting on the branches.  In the summer, the National Garden is a perfect spot for some shade and quiet, away from the noise of the bustling center. Our guides at Athens Walking Tours choose to walk in the shades of the garden, to beat the heat during our city tour. You can find many snapshots inside the Garden, including a photogenic tunnel draped in vines.

Located at the foot of the Acropolis Hill, Plaka is the oldest neighborhood of Athens and for some, the prettiest. You will fall in love with its cute narrow streets, the colorful houses, the beautiful neoclassical buildings, and the old orthodox churches that create excellent content for your pictures. Within Plaka there are also many museums and other places of historical interest. If you explore it in depth you will come across an almost hidden neighborhood called Anafiotika, named after Anafi island residents, who came to Athens as construction workers for the King’s palace early 19th century. Plaka is also full of steps and upward slopes which give wonderful views but can be a bit tiresome during the summer heat. It can also get quite crowded, so it is best to visit it early in the morning.  If you catch the blooming bougainvillea and the jasmines during spring or early summer, you will want to take a picture at every corner, trust me 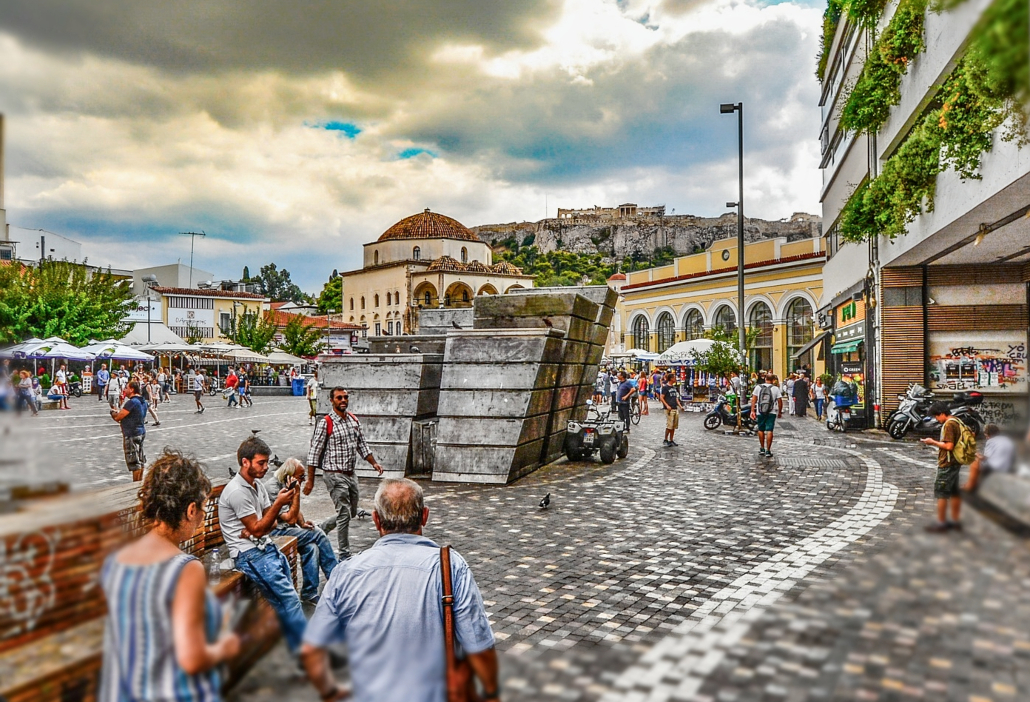 Monastiraki is perhaps the place where one can see different historical periods of Athens literally side by side.  For instance, you have the Library of Hadrian from the roman period adjacent to Tzistarakis Mosque from the Ottoman period. The large paved square where history blends is surrounded by cafes, restaurants, shops, and boutique hotels, almost all with an Acropolis view. The famous flea market of Monastiraki also begins from the square and is a jumble of shops selling mostly souvenirs, sandals, clothes, cosmetics, books, even paintings, and other handcrafted items. Within the square, there is a metro station and you will very often find street artists performing. You do not want the vivid multicultural atmosphere of Monastiraki missing from your pictures. You can visit it all day long, but again very early in the morning, you will gain some people-fee shots. Do not hesitate and book a tour now! 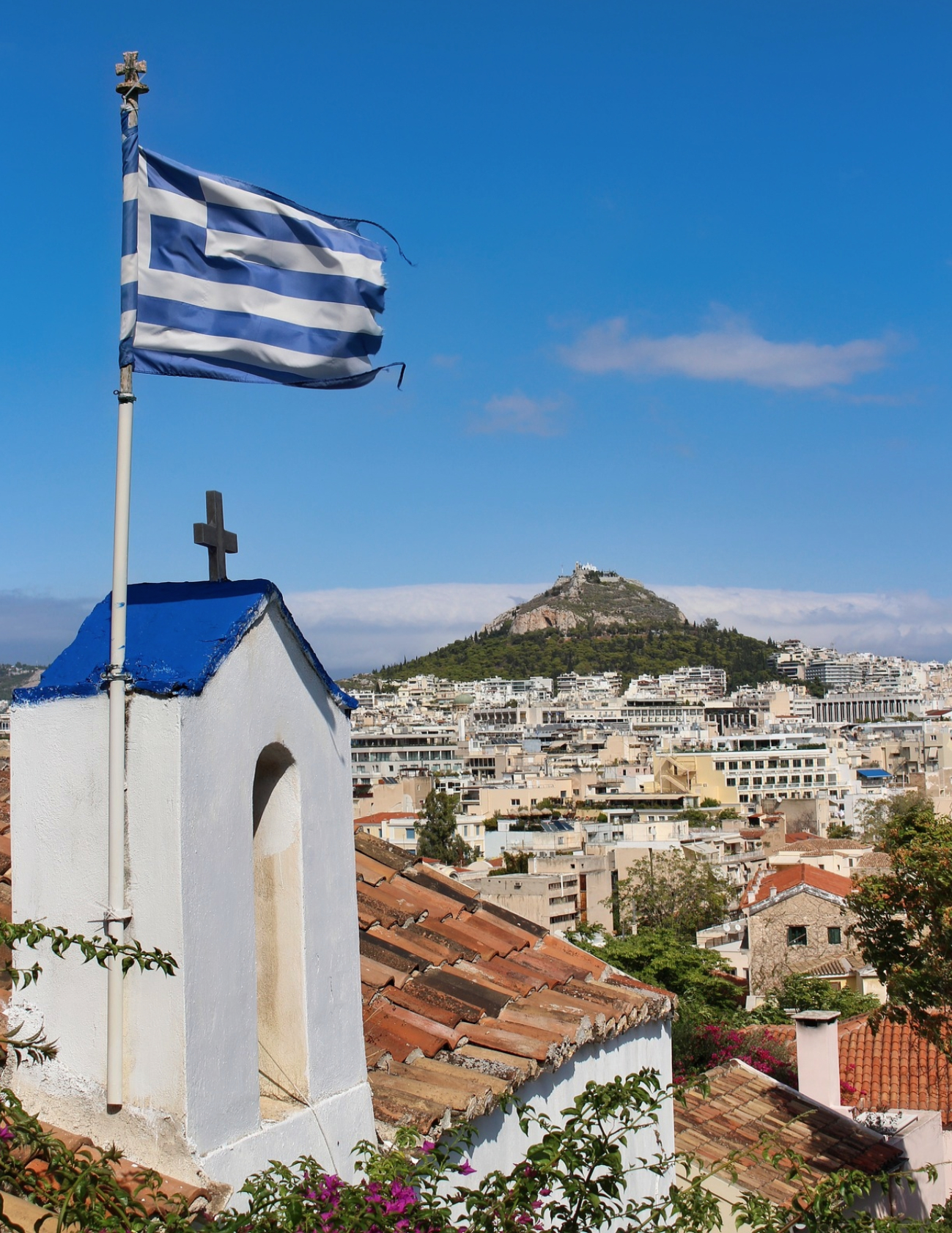 Again one of the most idyllic sites in Athens is Lycabettus Hill and its view from the top.  You can go by car, and also by funicular (fun fun fun) or you can walk up the hill from Kolonaki. There are many paths that lead up the hill, and along the way, you can get many insta-shots with natural frames of trees and wildflowers.  Once you reach the top you will see a church named St. George (Agios Georgios), 18th century old and very picturesque.  Make sure you have reached the top by sunset to catch some perfect shots. The hill provides a superb panoramic view of the city, and on a clear day, you can even have visibility as far as the Piraeus port. If you stay until the evening you will see the city, beautifully lit, beneath your feet.