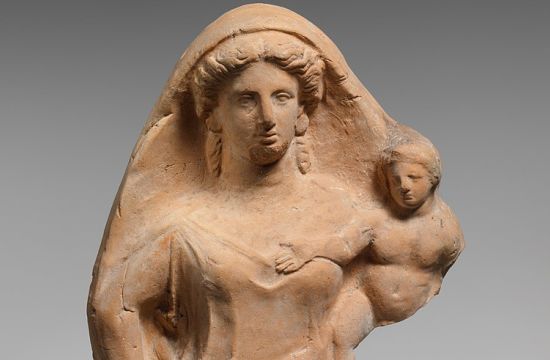 On the second Sunday of May, Mother's Day is celebrated worldwide, a holiday that has its roots in Ancient Greece. The following article, which is a Historical flashback to the sacred face of the mother through the centuries, is dedicated to all the mothers of the world, but especially to the mothers - guides of the Athens Walking Tours, to the mothers of the operation-back office of Athens Walking Tours, who are tirelessly in the operation 24 hours a day to serve our customers, but also to all the mothers who chose to tour and get to know Athens through the eyes and the passion of our guides.

"God made mothers because he could not be everywhere". I believe this Yiddish proverb is very accurate and describes "the mother" the best way.

Mother, mommy, mom, words that have come out of the lips of all of us for the most sacred and beloved person of our life, for the person, who is the life-giver of love, of offering, of the values that nurtured us, of dreams that passed on to us.

Mother, mother, mom. Three words that enclose beauty, tenderness, and love. The "mother", biological or not, is perhaps the most important presence in human life. A sweet and selfless existence. She is there when we need her, willing to listen to us and give us her advice, her care, her hug, to nourish and calm us, to magically banish our fear and pain. A strong bond that was praised more than any other, the mother was the source of inspiration for thousands of artists.

Ancient Greeks had a lot of respect for the mother and honored her accordingly as the life-giver, centuries before Mother’s Day was celebrated in the West.

The tradition of celebrating mothers and motherhood can be indeed traced back to Ancient Greece, where festivals were held in honor of the mother goddess Gaia (meaning mother earth). Over the years the cult passed to Gaia's daughter,  Rhea, who was named "Mother of the Gods", as she was the first to give birth and raise her children with breast milk. The ancient Greeks honored Rhea, the goddess of the earth and fertility every spring.

Ιn ancient Greece, Mother was a concept identical to fertility. This feast of fertility is determined at the beginning of Spring when the earth begins to bring to the surface what is hidden in its bowels with life. The concept of mother took the form of the goddess Demeter; the name itself derives from two words -, Earth + Mother. It is no coincidence that the word "cereals" in the Greek language (Dimitriaka) comes from the word Demeter who was the goddess of all growing plants and trees.

In the United States in the early 20th century, Philadelphia teacher Anna Jarvis fought to establish Mother's Day on Sunday, May 2nd. She wanted to honor her mother who fought for the reconciliation of South and North Americans after the end of the American Civil War in 1864. Anna Jarvis's struggles were vindicated in 1914 when Congress designated that day as the official national Mother's Day. Following her mother's 1905 death, Anna Jarvis conceived Mother's Day as a way of honoring the sacrifices mothers made for their children.

Mothers in the Greek Mythology and history

Goddess Demeter and her love for her daughter

History, as well as mythology, is full of mothers who showed their passion and love, even risked and sacrificed for their children. The ancient goddess Demeter symbolizes the archetype of the mother. She is the daughter of the goddess Rhea, while together with Zeus she had a daughter, Persephone. Legend has it that one day, Hades, the god of the underworld, kidnapped Persephone to make her his wife. Dimitra heard the voices of Persephone and started looking for her but to no avail. When she learned of her daughter's abduction, she became indescribably angry and her grief and anger led her to decide not to let any seed grow on the ground because this separation from her daughter is the same as death and plunged the mother into depression, sorrow, and despair. But humanity began to suffer from famine, and then Jupiter decided to intervene. He asked Dimitra to let the earth bear fruit and return to Olympus herself.
But Demeter demanded the return of Persephone. So Zeus ordered her daughter's husband to set his daughter free. He, however, obeyed by tying Persephone forever to the Underworld. Persephone returned to Demeter and the goddess let the earth sprout. From then on, Persephone spent four months in Hades (winter time for humans) and the rest with her mother on Olympus (spring and summer time for humans).

Kallipateira was the daughter of Diagoras from the island Rhodes who was a repeat Olympic Games winner
The regulations forbade women from entering and watching the Olympic games, otherwise, they were punished with death by throwing them from the mountain Typaio. Kallipateira, wanting to admire her son Peisirodos who was fighting, took the courage and, disregarding the relevant ban and the threatened punishment, disguised herself as a coach, entered and watched the fight. Being an Olympian winner was a special honor and distinction not only for the athlete himself but also for his family so she desperately needed to be there.

But she was betrayed by her excessive and justified enthusiasm for her son's victory. However, she was not sentenced to death, as many members of her family such as her father, three brothers, a son, and a nephew had achieved repeat victories at the Olympic Games.

Demeter and Kallipateira are proof of a mother's love that fears nothing and none.

Happy Mother's Day to all!