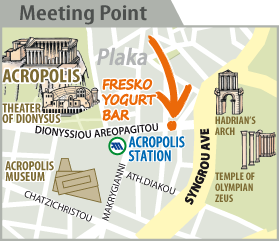 What makes this tour unique

On this small-group tour you will visit the Acropolis, the cradle of the European civilization, as well as the Ancient Agora where the Ancient Greek democracy came to life. Your expert local guides will bring life to all these amazing monuments with their storytelling!

What we do for you:

What we ask of you:

What You Will See and Do

Entering on the south slope of the Acropolis, you’ll visit the Dionysus Sanctuary and Dionysus Theater before you walk up the slope leading to the Acropolis monuments. Panoramic views of the city will be perfect for Instagram-ready photos.
During your tour, you’ll gain insight into the significance of the historic monuments of Acropolis including the Parthenon, the Erechtheion, the Propylaia, the Nike Temple as well as other significant sights of Athens including the Odeon of Herodes Atticus, the Ancient Agora, the National Observatory of Athens and the city’s scenic hills: Filoppapos, Mars, and Pnyx.
Note: After the first part of the tour, which ends on the Acropolis, you will have time to take more photos before walking to the Ancient Agora with your guide. Before the guided tour to the Agora, there will be no time for a leisurely lunch, so please make sure you have a snack and bottle of water with you.

After making your way through the narrow streets of the picturesque Plaka, under the Acropolis, you will end up at the Ancient Greek Agora.

Of all Athens' ancient sights, the Agora firmly defines the city’s status as the cradle of Western civilization.  This was where ancient Greek democracy came to life. It was a commercial, political, religious, and cultural hub where the greatest Greeks such as Plato, Socrates, Demosthenes, e.t.c. theorized, spoke out and debated. Explore the temples, an ancient concert hall and imagine ancient life under its famous long, marble colonnaded arcades. You’ll also see the significant artifacts at the Agora Museum, located in the two-storied Stoa of Attalos which was built in the 2nd century BC.
The tour ends at the Ancient Agora.

Entrance tickets are not included in the tour fee. We, however, offer free skip-the-line service by which we purchase the tickets in advance in order to save you time and avoid lining up at the cashier of each archaeological site you visit. The ticket costs will be paid by cash to our staff member before the tour begins. Note that children under 18 years old have free admission to the Acropolis and all the archaeological sites.

At Fresko Yogurt Bar Acropoli (3, Dionyssiou Areopagitou Street), look for your expert guide with an orange sign that says “Athens Walking Tours.” This location is at the beginning of the pedestrian walkway that takes you from Hadrian's Arch, Siggrou Avenue (also written as Syngrou), to the Acropolis.

Please be at the meeting point 15 minutes prior to tour departure time.

Our tip: While at Fresko Yogurt Bar Acropoli, it is a good opportunity to try a serving of fresh authentic Greek yogurt, best when topped with honey or a spoonful of Greek sweets. Be sure to ask for a free sample after you check in with your guide!

Check below the rates applying  to your party for all sites visited during this tour. Please make sure you have enough cash (Euros) with you to purchase the tickets from us upon check-in for your tour.

Children and youths under 25 years old are entitled to reduced or free admission at the sites, depending on age and nationality (a valid ID or passport is required for verification).

65+ EU Citizens are entitled to reduced admission at the sites and the museum (a valid ID or passport is required for verification).

The presentation of a valid ID or passport for verification at the sites is compulsory, in order to be eligible for any discount.

Prices of the entrance tickets are subject to changes without prior notice. For more details please check our entrance fees and tickets page

If you book a second tour with us, you are eligible for a 5% discount. Use the code SNDT at your booking process inside the promo code field.

Discount code for families and groups

Discount code for groups of more than 4 participants with second tour (SNDT+4): 10% discount to families or groups (4 or more paying members) booking more than one tours.

Please note that this is Athens' off-season period and our tours operate with a minimum capacity.

If the tour has not reached the minimum number of participants, we will inform you and offer you the following possibilities:
a) move the reservation to another tour or another day
b) run the tour as private with an agreed new fee
c) cancel tour and refund booking fee