Learn About Athens Through Your Taste Buds 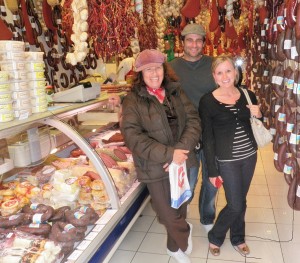 The 8th annual International Meetings & Incentives Conference (IMIC) with the topic “Tourism and Gastronomy in the Spotlight “ took place, with great success, at the Ledra Marriott Hotel in Athens on the 15th and 16th of February 2012. Naturally Athens Walking Tours were there.

A distinguished group of Greek and international speakers and panelists developed and presented their ideas to an audience of tourism professionals in the hope of providing a better understanding of the role, development, and future of gastronomy and culinary heritage tourism in Greece.

Despina Savvidou co-founder of the Athens Walking and Food Tours had the privilege of speaking at the conference about how the Athens Food Tours are a prime example of successful culinary tourism initiatives in Greece.

The Athens Food Tour was launched in 2010, thus making it the “baby” of the Athens Walking Tours family – which have been operating since 2004 with a selected team of licensed and highly qualified tour guides.

As Despina explained to a captivated audience, the Athens Food Tour is designed and executed with love and passion, so that the visitors of Athens can have an authentic culinary experience, thus learning about the history of the city, its people and customs of the whole country, by tasting cultural dietary staples such as sesame rolls, Greek olives, Greek coffee and sweet honey doughnuts known in Greece as “loukoumades”.  Not a bad way to spend a couple of hours learning something new about a foreign city now, is it?

Despina took great care in planning and mapping out the tour so that the “touristy” areas were at the greatest part avoided allowing visitors to get as close a look as possible to everyday life of the Athenians. Thus, visitors are led through the back streets of Athens, literally a Minotaur maze to the uninitiated, the main food markets (Varvakeios), small traditional food and spice shops, dairy shops and popular with the local’s restaurants, where visitors get a glimpse of busy Athenians on their lunch breaks. Everyone on the tour has the opportunity to taste various delicacies that are offered welcomingly as the food specialist explains the history and “story” behind every food type.

And the verdict at the end is unanimous! The visitors love it because they know they are experiencing the “real thing”, but also because they are not treated as a herd of balky eyed tourists but as valued guests. At the end of the tour everyone has the feeling that they have made new friends and some participants depart vowing to keep in touch. This is definitely an experience that bonds and fortifies. Food does that and Greeks know this very well.

This is just a small example of what some satisfied participants have said of the Athens Food Tour on Trip Advisor:

The Athens Food tour takes place every day except Sundays.