The Vasilopita Tradition and St. Basil 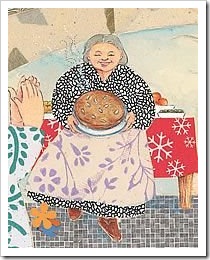 My grandmother baked tsoureki twice a year, on New Years Day and on Holy Saturday. On New Years it was in the form of a thick round Vasilopita with a shiny new coin hidden in the soft dough, commemorating Saint Basil’s name day and on Holy Saturday it was shaped in a voluptuously soft and curvy braid. But regardless of the shape it always smelled heavenly. Being that she was from Asia Minor, my grandmother used the most luxurious spices in her cooking, and no extravagances were spared, especially on New Years Day. We could hardly wait until the Vasilopita was out of the oven so that the whole family could gather around the table and cut the bread to see who would be the luckiest in the family to win the Vasilopita coin.

In every family, it is always the most senior member of the family who did the honor of slicing the bread, and from my childhood, I always remember that person as being my grandfather. With large machete in hand, he would perform the cross on the bread then proceed in cutting each piece carefully and meticulously. The first piece always goes to Jesus Christ, then the Virgin Mary, then the house and then to each member of the family.

St. Basil lived in Cappadocia during the 4th century and was the archbishop of Caesarea. He is known for helping the poor and the underprivileged. He was also the first person in human history to establish an orphanage for little children and he founded the first Christian hospital in the world. It is no wonder why he was considered one of the holiest men of the Byzantine world and singled out for his wisdom and infinite compassion.

Throughout the month of January, a specific date is set for the pie-cutting ceremony. This is done by all families as well as businesses. Sometimes a party is also scheduled to accompany the pie cutting. The lucky employee who wins the coin is usually given a cash reward or other gift certificate. 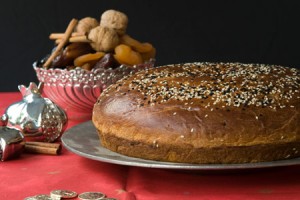 Go ahead and try it yourself. Below you will find my recipe for Vasilopita, the one that has been in my family for decades and is handed down from mother to daughter. Invite the family over for dinner and have a pie cutting ceremony of your own. It is a wonderful way to start the New Year with positive intentions, gratitude and a bit of good luck!

•  In a large tub pour half a cup of lukewarm milk and dissolve the yeast in it. Add ½ cup flour and stir to mix. Cover with a towel and let rise in a warm place for about an hour.

•  While the dough is rising, beat the egg yolks with the sugar and set aside. Beat the egg whites into a meringue. Add the yolk/sugar mixture, the remainder of the milk, the meringue, butter, mahlepi, mastic, cloves and zest to the risen dough. Knead until all is well mixed, adding the remainder of the flour a little at a time so the dough won’t be too tight. Shape the dough into several balls, place in a bowl, cover it with a towel and leave in a warm place for about 3 hours until it doubles in size.

•  Knead the dough for 5 minutes more and place in a large round oiled pan (or two smaller ones) and leave covered in a warm place until it doubles in size again.

•  Before placing in oven, beat the yoke of 1 egg with a teaspoon of water and brush it on the dough with a pastry brush. Then, using the blanched almonds, form the “new year” date on the top of the dough. Sprinkle the bread with the sesame seeds and bake for about 30/40 minutes, or until Vasilopita looks well browned.

Oh! I almost forgot…don’t forget to slip in a shiny new coin before baking. Maybe you’ll be the lucky one for this New Year!