“Plaka” and “Makriyianni”: The most picturesque neighbourhoods of Athens

Discover the most beautiful and picturesque corners of Athens, by visiting these two neighbouring areas, the “Plaka” and “Makriyianni” (or “Makriyanni” or “Makrigianni”).

The beautiful neighbourhood of Plaka

Plaka, occupies the area right underneath the Acropolis, set among Syntagma sq., Monastiraki , the Ancient Agora and Thissio; the Amalia Ave. and the Makriyianni area. It is Athens’ oldest and most picturesque area, also known as the “Neighbourhood of the Gods”.

The houses of Plaka, mostly small buildings, built in the style of the Cyclades by the settlers of Anafi Island (Anafiotika area) in mid. 18 c. A.C., as well as many neoclassical buildings, spread around the north-eastern slopes of the Acropolis, like colourful pebbles, tossed dice from the palm of Goddess Athena’s hand!

Walking through the small tangled cobblestone alleys, one can only but be overwhelmed by the urge to discover more about this wonderful area! And there’s indeed so much to see and to discover! 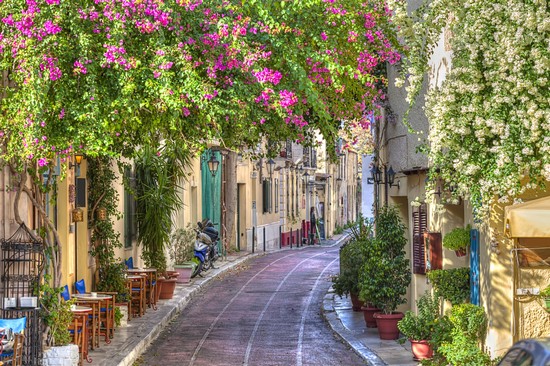 Lovely old churches and chapels, residences with historical significance, ruins and famous archaeological sites, quiet corners full of blossoms, with picturesque views of the entire Athens, souvenir shops, small art galleries and museums; they all await you, in the shadow of the majestic Parthenon.

There is no plan, nor a pattern that one should follow to see all there is to see. Just follow the narrow, sometimes labyrinth-like, streets to wherever they take you. No need to hurry, no need to worry if you momentarily feel like you lost your way: Find shelter in one of the cosy coffee places, with chairs and tables set on flower – filled stairways, or in the simple shady taverns and when you feel ready, continue your trip through history and beauty! 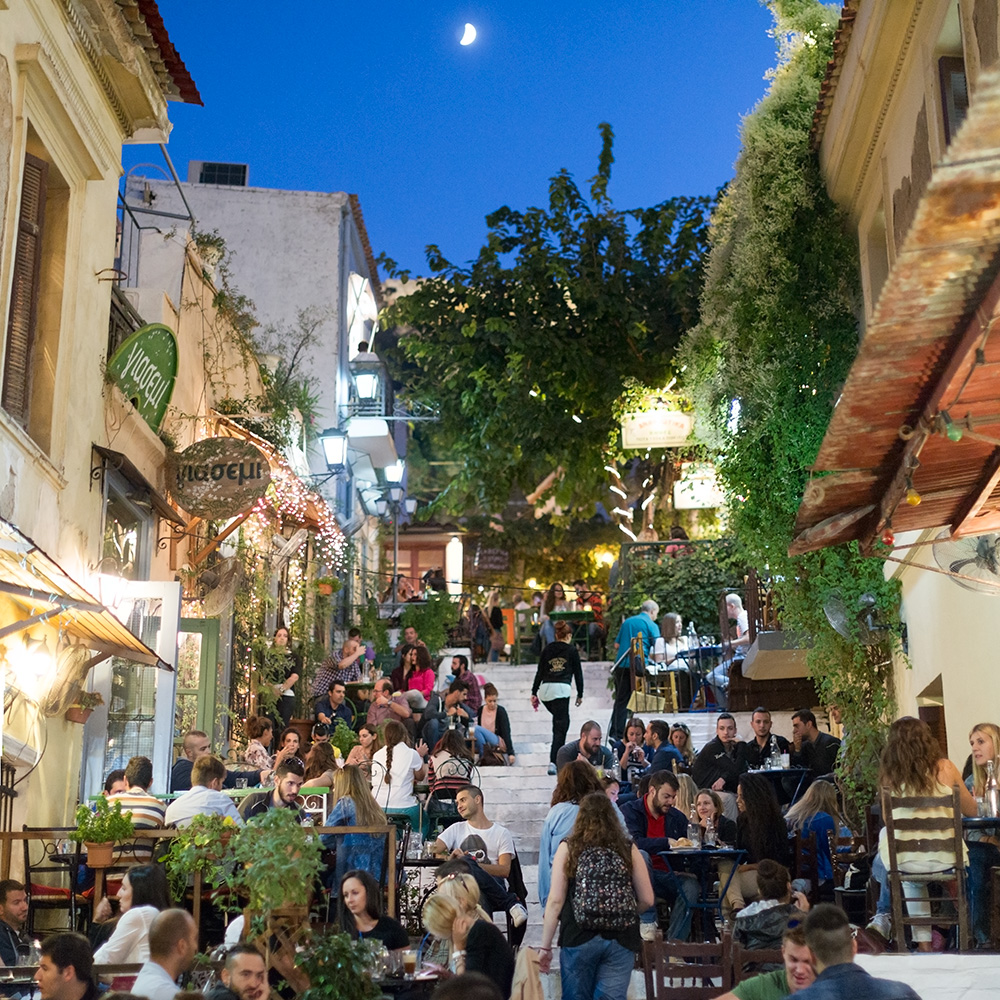 The vibrant and cosmopolitan taverns and restaurants in Plaka

Let Plaka amaze you with the variety it has to offer in scenery and sightseeing options: The areas closer to the Acropolis, seem more secluded and quiet, while the squares and the alleys surrounding the main and most ancient road in Athens, Adrianou street, are filled with life. Whether flowerpots with geranium or clothing at the shop windows, colours are everywhere to be found! 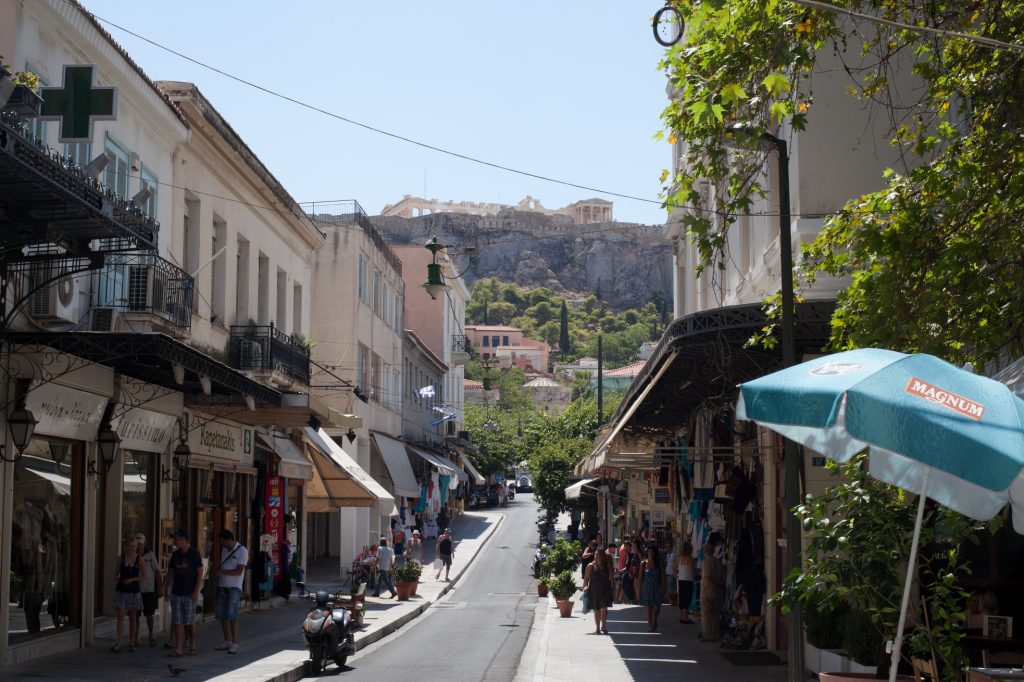 Indelibly marked by history, yet, in a magical way, unspoiled by the passing of the time, Plaka, is a crossroad of civilizations, inhabited since the antiquity. It is up to you, to discover the traces of all eras: Find the cradle of Democracy, the history of Socrates and Pericles and evidence of the daily habits of the Athenians 2500 years ago, in the beautiful, worth-visiting site of Ancient Agora.

Discovering the many charms and secrets of Anafiotika and Plaka is truly worth the effort! The knowledgeable and licensed tour guides of Athens Walking Tours would be happy to put together a custom made tour for you that would include The Plaka district, the Ancient Agora and of course the Anafiotika area. Or just visit them on your own after your Acropolis Tour or the Athens Food Tour.

Find great remains of the Roman occupation and admiration to Athens by the Romans, at the Roman Agora. Next to the amazing Tower of the Winds, the octagonal, Pentelic marble clocktower, you will find the ruins of the “Mendrese” building from the Ottoman occupation, tied with a rich part of modern history, known to only a few. From the byzantine times, there are numerous churches, chapels, and remains of well-hidden convents.

It is in Plaka, where you will also find the building which housed the first University of Athens (1837 – 1841 A.D.), as well as the houses of prominent citizens, poets, writers or even saints of the newer Greek history. Many of these houses have been transformed into Museums, with mission to salvage and make known to the world, rare pieces of Greece’s history and tradition. 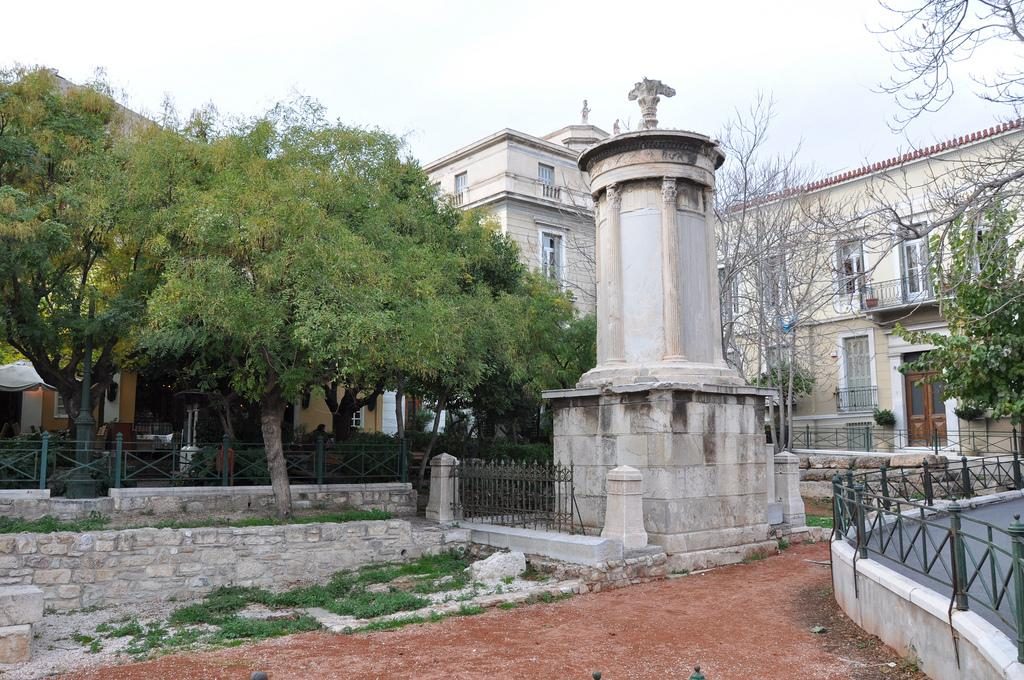 The Lysicrates square and monument

At the end of Adrianou street to the south and past the Lysicrates square and monument, the small Vironos street, leads to “Makriyianni” area. The feeling one gets when approaching the heart of this very small, but yet, so important area, is the common feeling we all share about… a sunny Sunday morning! 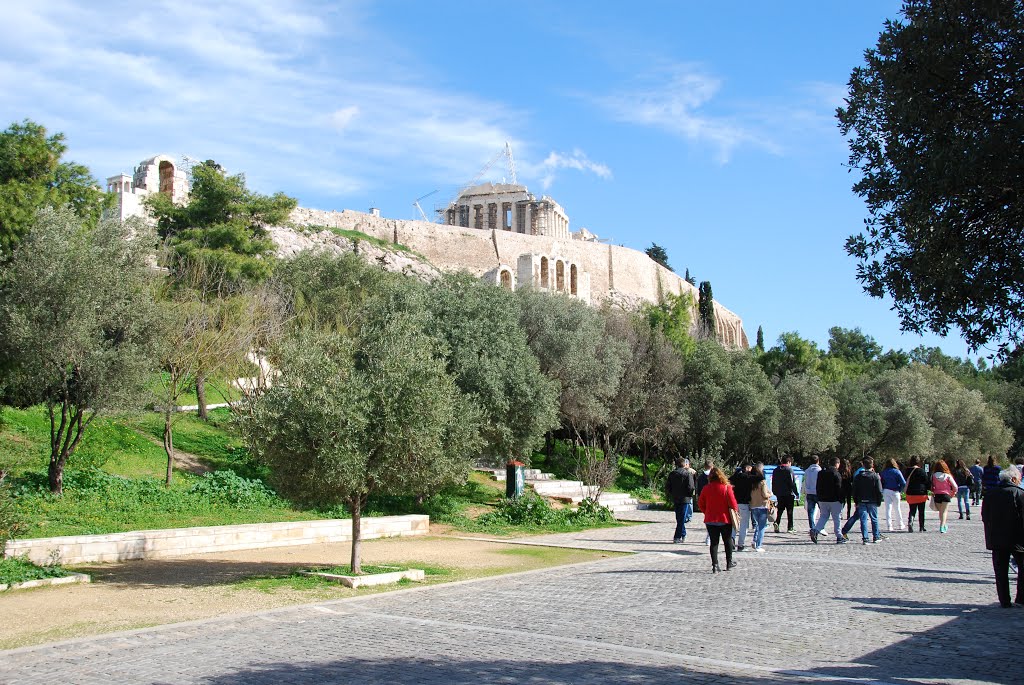 The wide, lovely pedestrian streets of Dionysiou Areopagitou and Makriyianni are almost always filled with life. People walking leisurely, or bicycling or enjoying their beverage or meal at the tables set along the way.

The area is dominated by the beautiful and impressive modern building of the Acropolis museum, set right on top of the remains of a part of Roman and Byzantine Athens, which are fully visible through a glass floor. The museum was built right next to the historical building of Makrigianni military hospital, later on used as Gendarmerie headquarters and bind to the modern history with a violent battle that took place there during 1944…

At the junction of the streets Makriyianni and Dionysiou Areopagitou, stands the proud statue of the general Ioannis Makriyiannis, Greek general of the Greek war of Independence in 1821. The entire area was named after him. 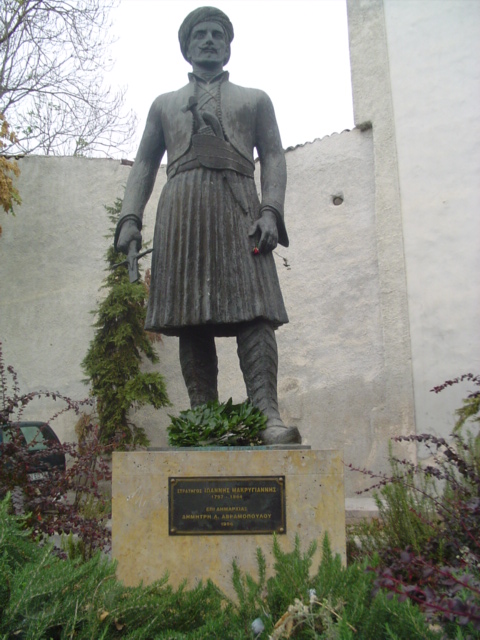 The statue of the Greek General Ioannis Makriyiannis

Α pretty, little, shady, square, next to the statue of Makriyiannis, hides the Entrance to the south slope of the Acropolis and to the most ancient theater in Greece and the whole of Europe and the western civilization; the Theatre of Dionysus. 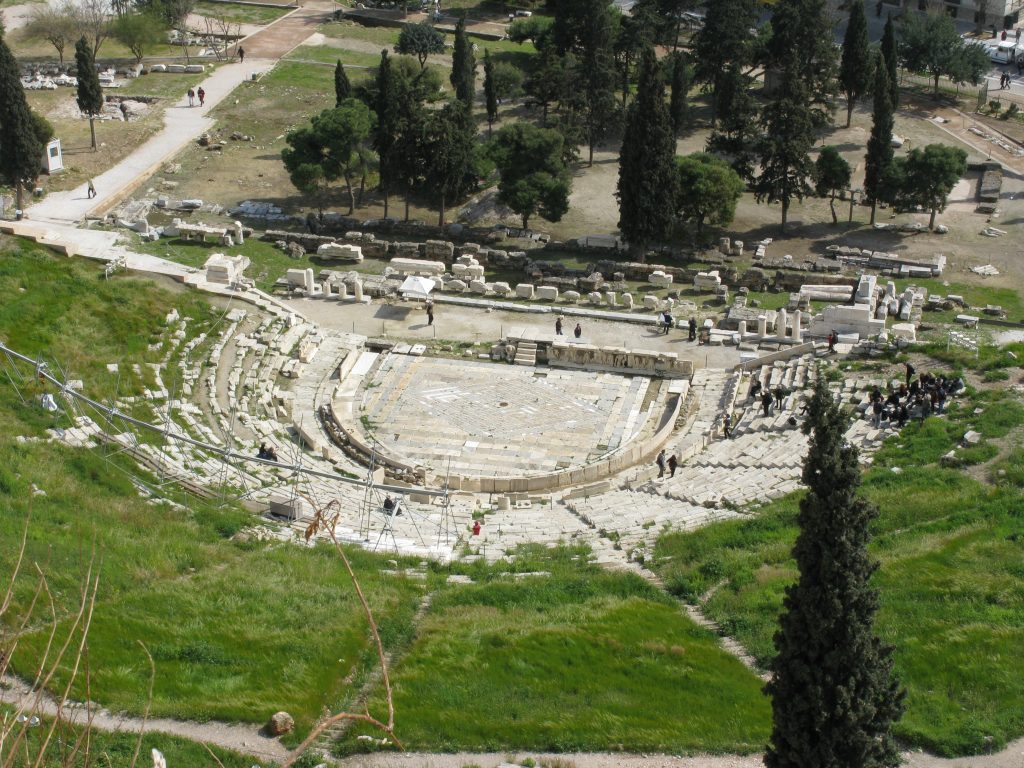 The glorious Theatre of Dionysus

The point at which Dionysiou Areopagitou street meets the noisy Amalia Avenue, marks the southern border of Makrigianni area. The bust of Melina Mercouri (Melina Mercouri was a world-famous actress, politician,  Minister of Culture for eight and a half years) is placed right at the beginning of the pedestrian street, as if to guard the Acropolis and its’ wonderful findings, part of which, she fought so hard to gain back from the British museum during her career as a ministry of culture. 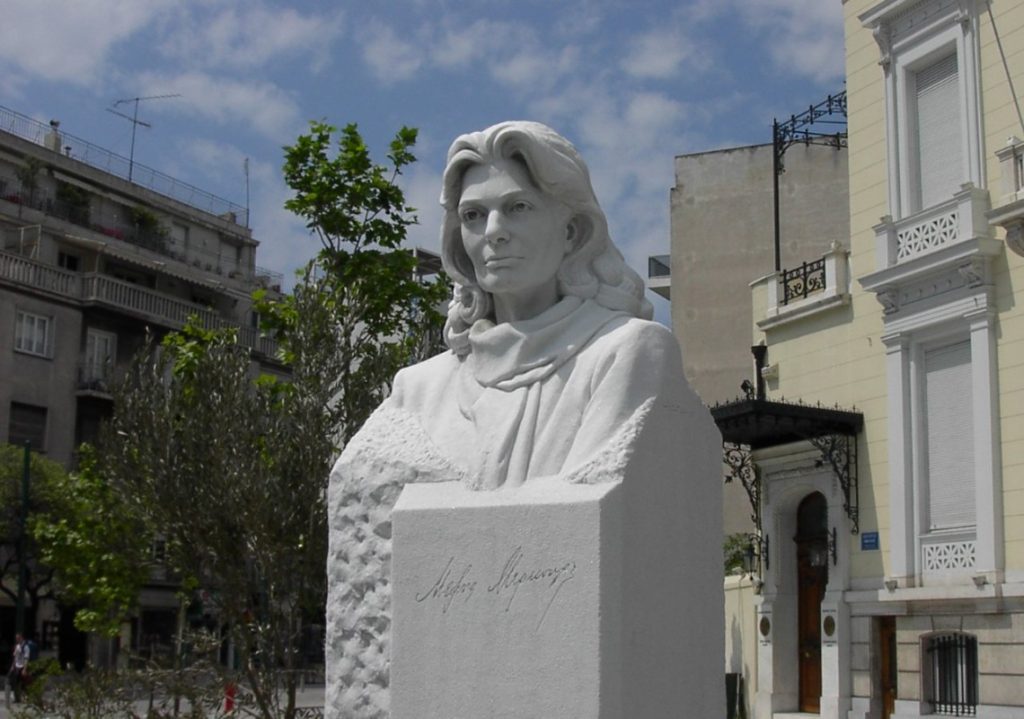 The bust of Melina Mercouri

Makrigianniarea, apart from the Plaka, borders with the neighbourhood of “Koukaki” to the west and the prestigious Acropolis area and is excellently connected to the major Athenian destinations by the Metro. The namesake Metro station is located by Makrigianni Street, right outside the Acropolis Museum. 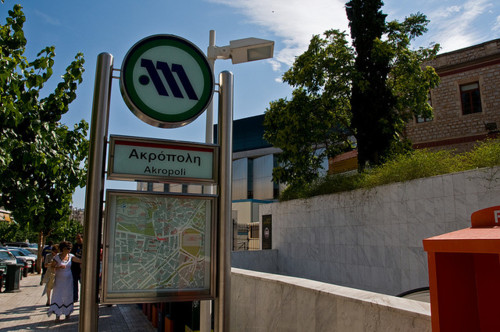 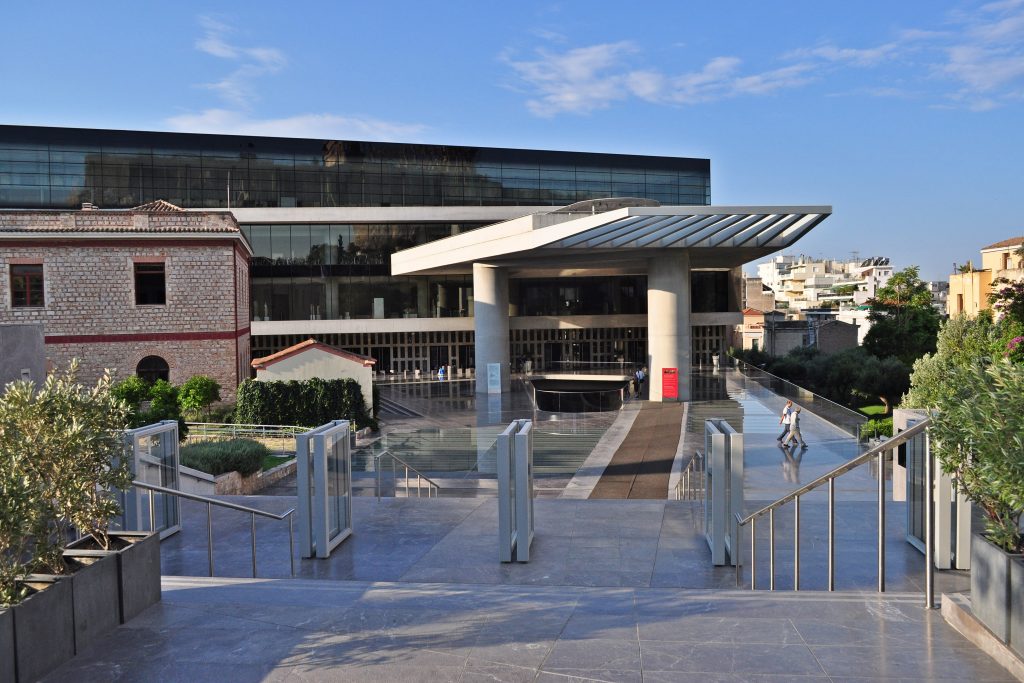 The Acropolis Museum in Athens