Every year, every summer, unique events and performances take place during the popular “Athens & Epidaurus Festival” in various Athens’ venues and also in the wonderful Epidaurus Theatre.

Drama, Comedy, Dance, Live concerts, are being performed in some of the most beautiful and atmospheric ancient theatres, such as the Odeon of Herodes Atticus (Herodion) in Athens located at the foot of the Acropolis and the Ancient theatre of Epidaurus in Epidaurus, approx. 150 Kms away from Αthens City. 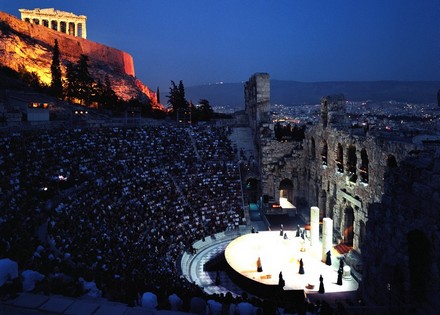 A performance in Herodes Atticus Theatre

If you are visiting Athens in the summer, don’t miss out on the rare opportunity to attend one of the wonderful performances taking place in these Theatres during summer:

June 15, 2017 – French singer Imany became famous in Greece with her first single, “You will never know,” followed by several hits. Imany claims that Greece is one of her favourite destinations, due to her unique bonding with Greek audiences. The singer will perform at the Odeon of Herodes Atticus for a single concert where she will sing older hits and new songs from her latest album The Wrong Kind of War. Through songs such as “Clap your Hands,” her voice resonates as a way of “screaming loud and clear for freedom, justice and equality.” Audiences will enjoy her exotic, nostalgic, romantic, sensitive yet dynamic voice under the Acropolis rock.

June 19, 2017 – The beloved Greek singer Maria Farantouri will join forces with Turkish, Greece-based composer Cihan Türkoğlu. The pair will present an original piece of work by Türkoğlu, with lyrics by Agathi Dimitrouka. The piece will make its international premiere at the festival, along with Türkoğlu’s covers of Mediterranean – Greek, Turkish, Sephardic, and Arabic – songs. The performance will cover a wide musical range, from Mesopotamia to Europe, fusing disparate musical traditions, such as Medieval, classical, jazz, and minimal music.

June 28, 2017 – Sixty musicians and twenty dancers will infuse the stage of the Odeon of Herodes Atticus with the Cretan spirit, through a number of songs that will paint a complete picture of the musical landscape of the island of Crete, delivering its collective memory and knowledge in a compact form. Coming all the way from Crete, this concert is dedicated to the richness and beauty of Cretan music.

July 21, 23, 25, 27, 2017 – The 2016-2017 season will come to a close with the second big Greek National Opera production to be held at the Odeon of Herodes Atticus: Giuseppe Verdi’s masterwork Il Trovatore, one of his most popular operas. By far the most iconic melodrama of Romanticism, this opera is immortalized through its melodious and dynamic music, its passionate arias and duets, and its famous choral parts. The plot moves back and forth between heat and cold, between its four main characters burning with passion, and the moon casting its cold light on extreme situations. 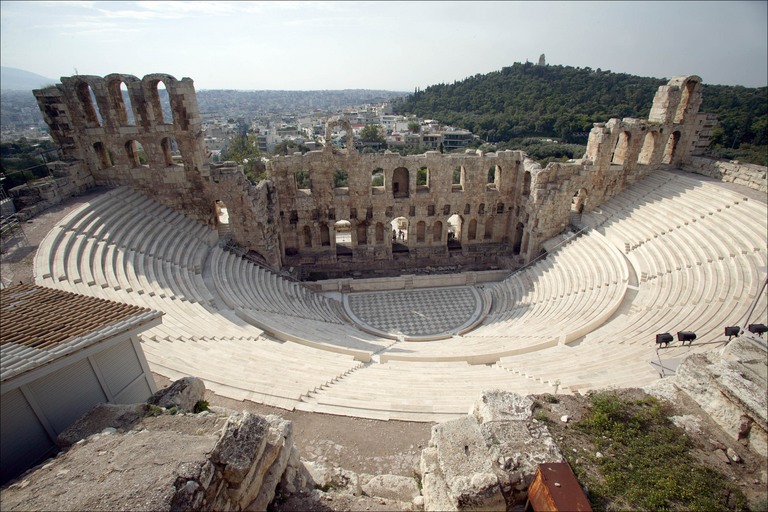 The Odeon of Herodes Atticus, as seen from the South slope of the Acropolis during the visit with Athens Walking Tours

King Oedipus abdicates in favor of his two sons in the aftermath of horrific familial revelations. Although the brothers initially agree to take turns ruling Thebes, Eteocles does not keep his end of the bargain. A furious Polynices joins forces with Adrastus, king of Argos, and raises an army against Thebes. Seven captains of the two opposing armies meet at the seven gates of the city. Eteocles and Polynices confront each other at the seventh gate. With Thebes under siege, Eteocles, the main tragic character, attempts to strike back in what turns out to be a doomed battle with no clear-cut winner. One of the most successful performances of last year’s Festival, Seven Against Thebes is repeated this year, kicking off the Epidaurus Festival 2017 programme.

The great Greek composer Nikos Kypourgos and the talented young writer Dimosthenis Papamarkos have been commissioned by the National Theatre of Greece to write the music and libretto respectively for a musical adaptation of Aristophanes’ Peace, directed by the accomplished Konstantinos Arvanitakis. The role of Trygaeus is played by the unorthodox musician/actor Tzimis Panousis. The Armonia Atenea – The Friends of Music Orchestra will perform live during the performance under the baton of internationally acclaimed conductor George Petrou. Peace was first presented at the City Dionysia festival in 421 BC.

Director Katerina Evangelatos makes her Ancient Theatre of Epidaurus debut, tackling one of Euripides’ most intriguing and provocative tragedies, on commission by the National Theatre of Greece. Dramatizing the triumph of life over death, Alcestis (438 B.C.), Euripides’ oldest surviving work, is the subject of endless debates regarding its genre, as it contains both tragic and comical elements. The obvious Sophist influences of the play have triggered a series of moral questions about the nature of interpersonal relationships.

The Ancient Theatre of Epidaurus, famous for its extraordinary acoustics, can be visited also during the day!

Athens Walking Tours can arrange your transportation, by private, air-conditioned vehicle, to and from Epidaurus Theatre. All you have to do is ask us!

The Ancient theatre of Epidaurus can be visited also during the day! Join our Argolis Tour (Mycenae and Epidaurus) or our four-day tour to Mycenae, Olympia, Delphi and Meteora tour and enjoy a guided visit to this remarkable Theatre!