After the idyllic, romantic, spectacular locations described in Part I, you should by now be thrilled with anticipation for part II of the most instagrammable spots in Athens.  Get ready, go, shoot!

The National Library is located on Panepistimiou street (metro station: Panepistimio). It was designed by the esteemed Danish architect, Theophilus Hansen in the 19th century to resemble the Propylaea on Acropolis. It is a gorgeous, neoclassical building, and its façade is spectacular, but especially its grandiose staircases extending to both sides of the entrance, left and right, are perfect for an instaphoto. Nowadays most of its massive collection of books and manuscripts has been transferred to Stavros Niarchos Foundation where there is more space and state-of-the-art facilities. It is best to visit it in the morning. 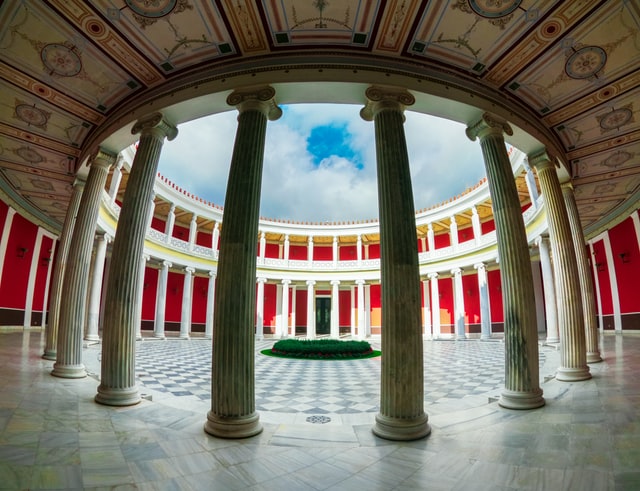 Continuing the extremely photogenic locations of the National Garden and the Panathenaic Stadium, I could not leave out the Zappeion.  It took its name from the national benefactor, Evangelos Zappas, who aided financially its construction. Zappas wanted to revive the ancient Greek ceremonies of the Olympic Games, and that is why he built the Zappeion close to the Panathenaic Stadium.  The Zappeion is located in the heart of the National Garden, and it is an impressive mansion of neoclassical architecture.  Today the Zappeion is used as an exhibition and conference hall for public announcements, fashion shows, etc.  The light is best in the afternoon for that romantic instapic. 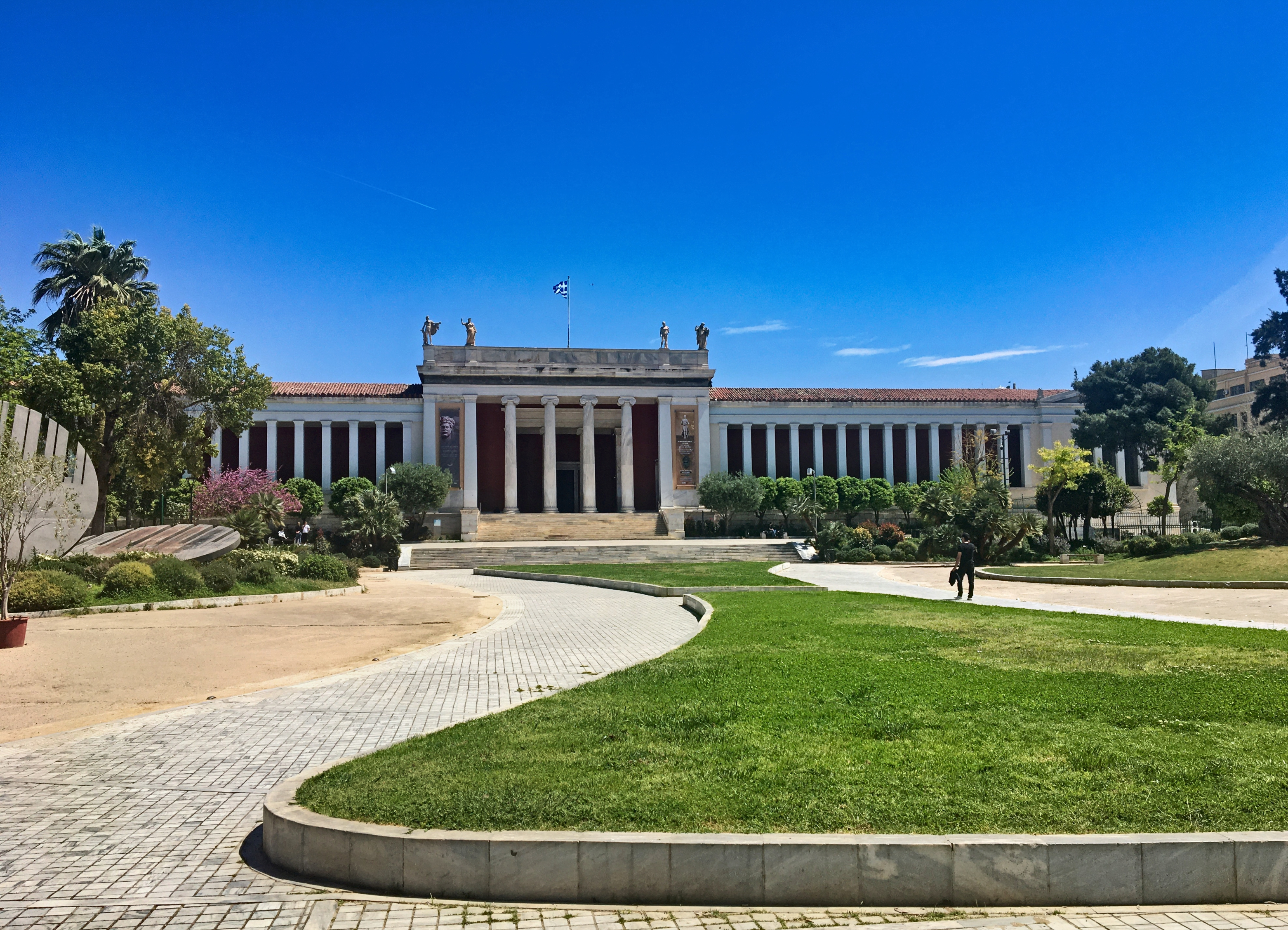 It is the largest museum in Greece, with more than 11.000 exhibits in a total of 8.000 square meters. It provides a comprehensive presentation of Greek civilization, from Prehistory to Late Antiquity. Among its wealth of exhibited artefacts, you can find the gold mask of Agamemnon, the famous Antikythera Mechanism - the world's ancient 'computer', the statues of Kore and Kouros, and many more must-see exhibits. As it is housed in a magnificent 19th-century neoclassical building designed by Ludwig Lange and remodelled by the famous architect Ernst Ziller. Outside there is a beautiful yard that waits for that perfect instapose with an impressive background of the museum building.

4. The Parliament (and the changing of the guard) 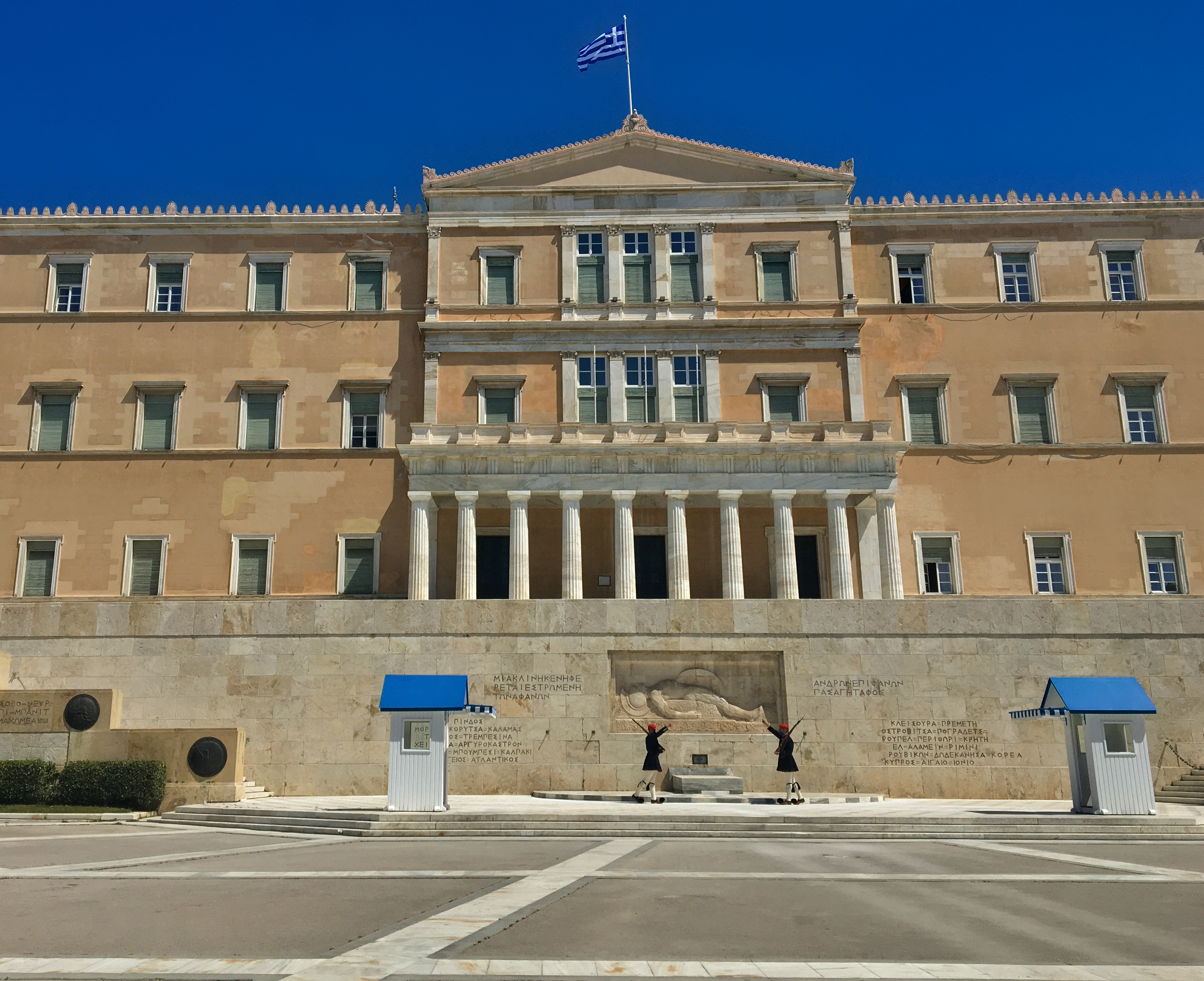 The Greek Parliament is located at Syntagma (Constitution) Square, one of the most historical squares of Athens.  It was built in 1842, originally to serve as the residence of the King. At its bottom lies a very important monument, the memorial of the Unknown Soldier.  It is guarded by two Evzones, a special task force who are dressed in the traditional foustanella (a pleated skirt-like garment, part of a male national costume), and who switch posts every 15 minutes after having to stand absolutely still and mute.  Every hour, they are replaced by their colleagues, in the famous changing of the guard performed slowly and ceremonially, in a way that seems almost like choreography.  It is perhaps one of the most photographed happenings, and therefore instagrammable musts. Every Sunday the complete group of Evzones parade in front of the Greek Parliament. 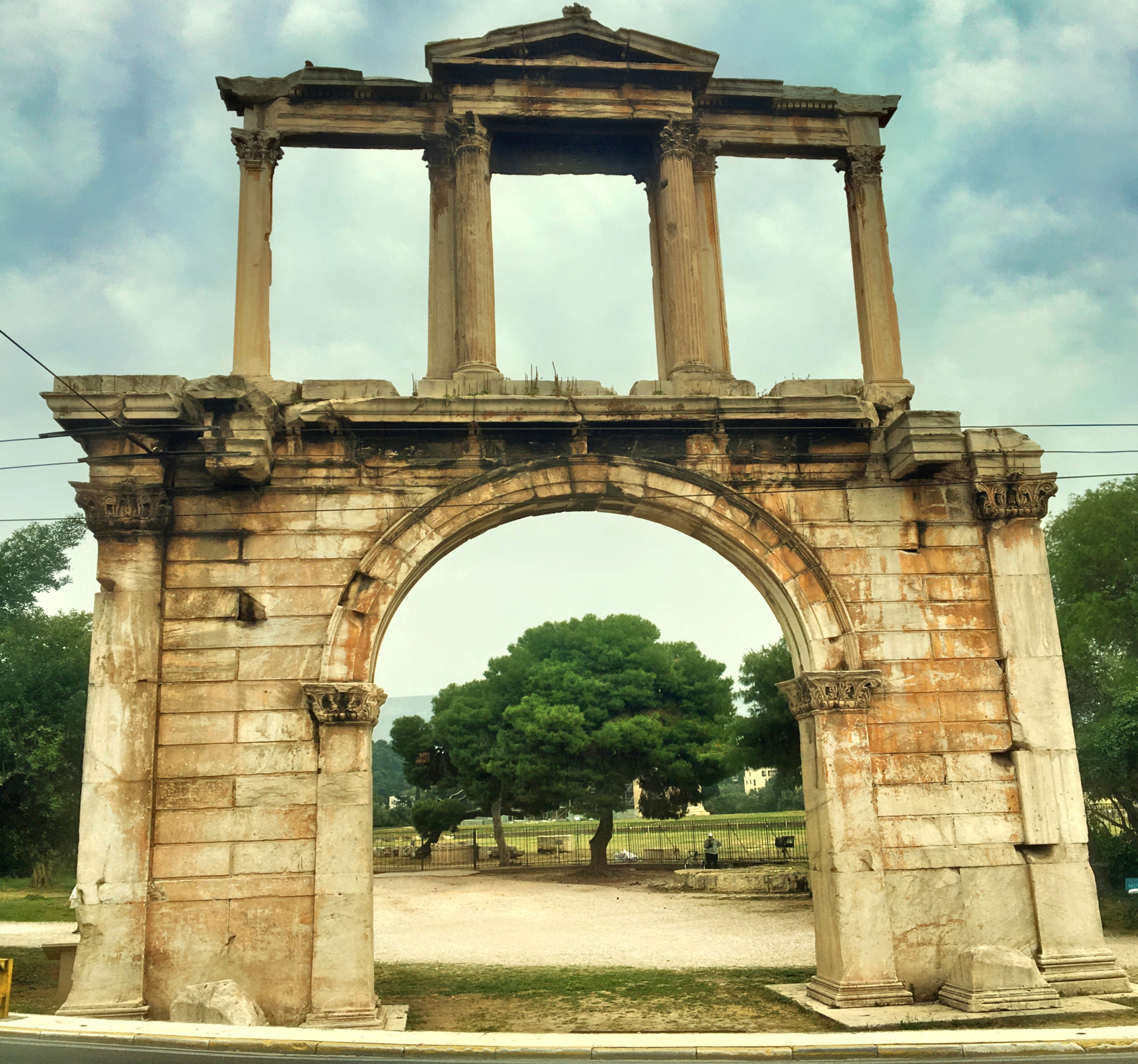 Hadrian’s Arch, a monument from Athens’ Roman days, is located just outside the site of the Temple of Olympian Zeus. The Arch or Gate used to be the border between the ancient greek city and the new city of the Roman Emperor Hadrian.  Hadrian was a great admirer of greek culture and during his time, he became a benefactor of Athens.  Through the Arch, the Acropolis is visible, creating a perfect photographic background. 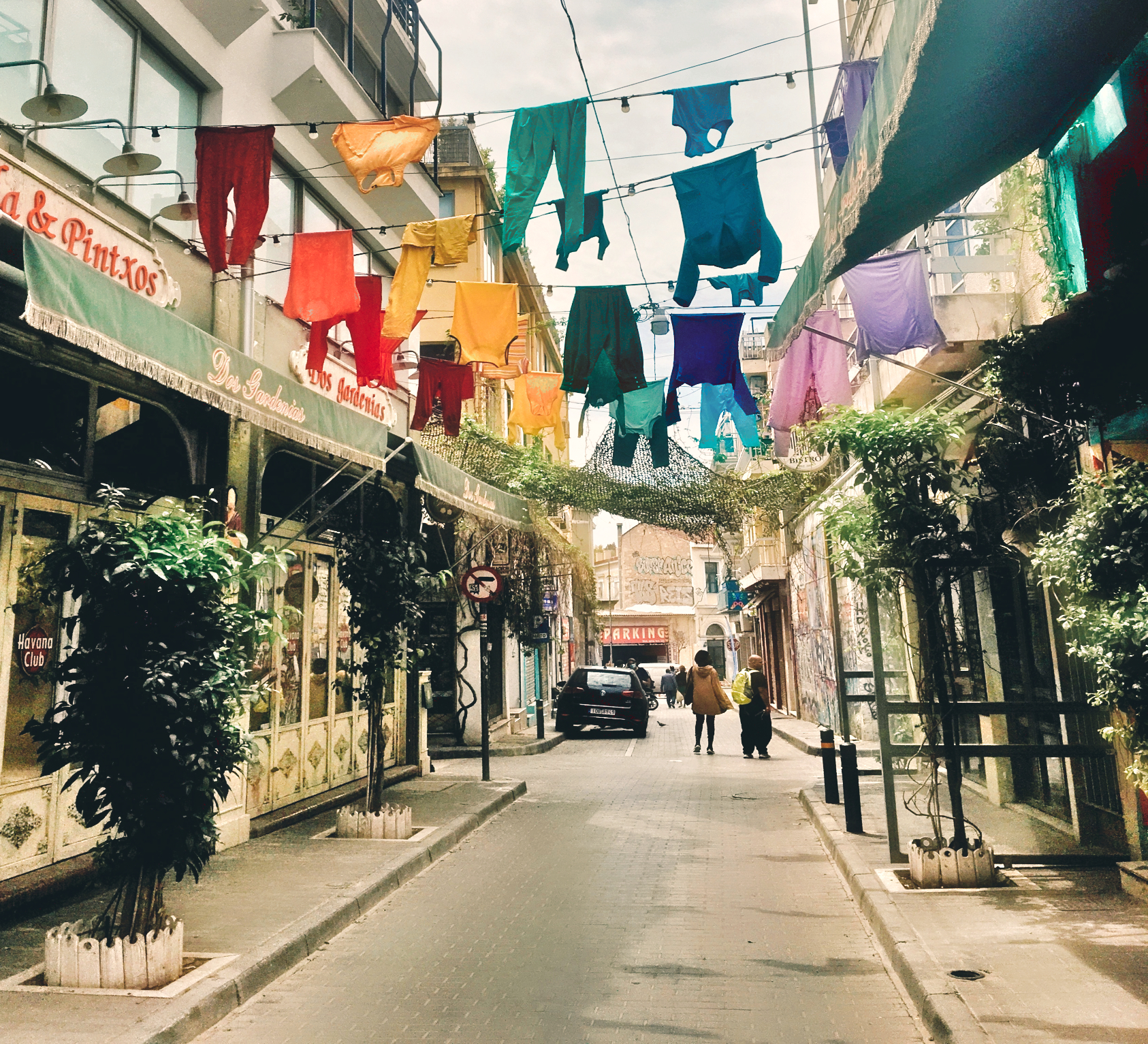 Psiri is one of the most colourful and vibrant neighborhoods of Athens. Located just next to Monastiraki, it gets really busy at night, as it is one of the most preferred nightlife destinations, especially for locals.  Full of graffiti murals from local artists, cute shops with alternative clothing and jewellery, fun terrace bars, superb restaurants, theatres and clubs, Psiri is the place to be, especially when it comes to nightlife! You will also find many cool antique shops with blasts from the past, as well as delicious bakeries with bougatsa (custard pie), or the famous Greek koulouri (type of sesame bagel).  Usually not very busy in the morning, get there early for some urban-chic shots.

On the second floor of the newly established (2009) and spectacular Acropolis Museum, there is a gourmet café-restaurant that offers delicious dishes with local ingredients and a fabulous view of the Acropolis itself. A visit to the café after the Acropolis Museum must-tourVar is strongly recommended in order to capture that much-envied ethereal pose with the sacred rock as your background.  Late in the afternoon you can enjoy a glass of wine, overlooking the sun setting behind the Acropolis hill. 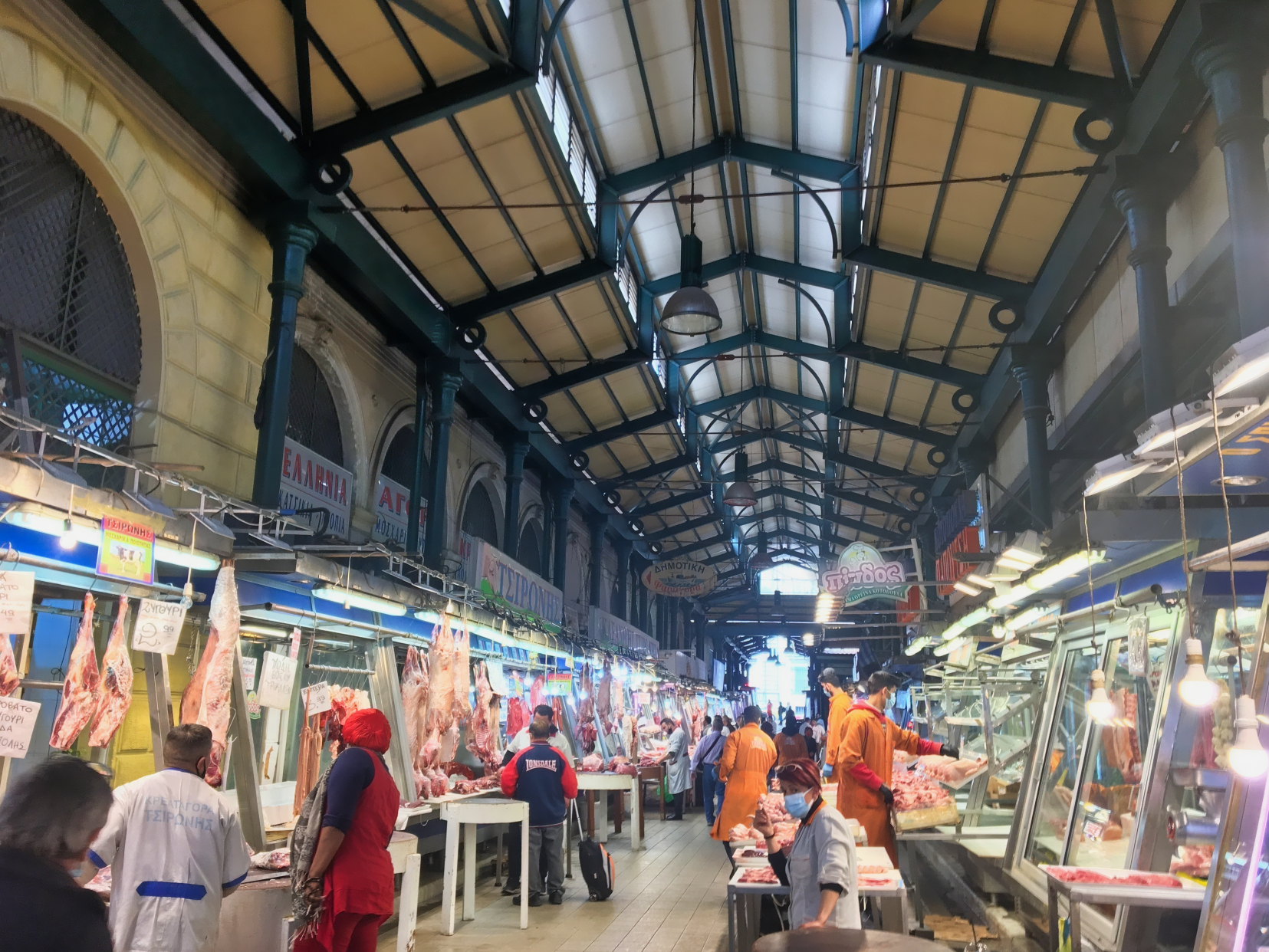 If you would like to mingle with the locals and do some grocery shopping, you should definitely visit the Central Market of Athens or Varvakios, as it is called. Inside an impressive roofed building, dozens of producers sell goodies like fresh vegetables, nuts, olives, cheese, honey, meat and fish.  The producers tout their produce with stentorian voices and will even give you treats for free, in order to advertise their top quality goods.  You will also find some iconic restaurants inside the Varvakio, some of them operating since the ‘50s, famous for certain meat dishes.  Whether you are interested in food photography or not, a visit to the central market and the producers’ stalls is the absolute local experience.  However it closes in the afternoon, therefore you should try it in the morning or at noon. 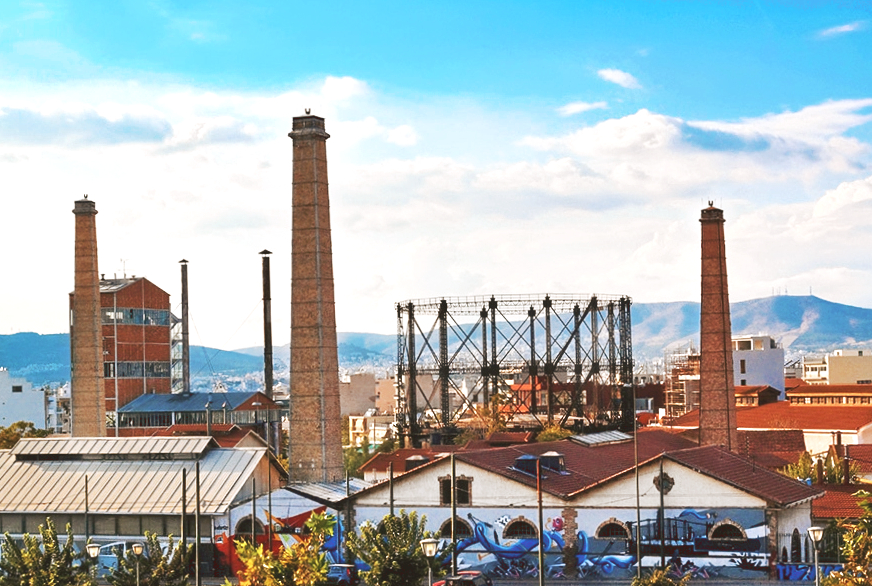 The old gasworks plant of the city has been converted into a unique museum and venue of industrial style called Technopolis.  It is an open multispace, vibrant and artistic.  Every year, a wide variety of cultural events take place in Technopolis, such as concerts, exhibitions, and happenings of performing arts, attracting more than a million visitors.  Gazi, the area around the Technopolis, is a nightlife hot spot for both locals and visitors.  It is full of bars, restaurants, and cafes, creating a very buzzy, energetic aura.  Ready for that supercrazy, party animal instastory? 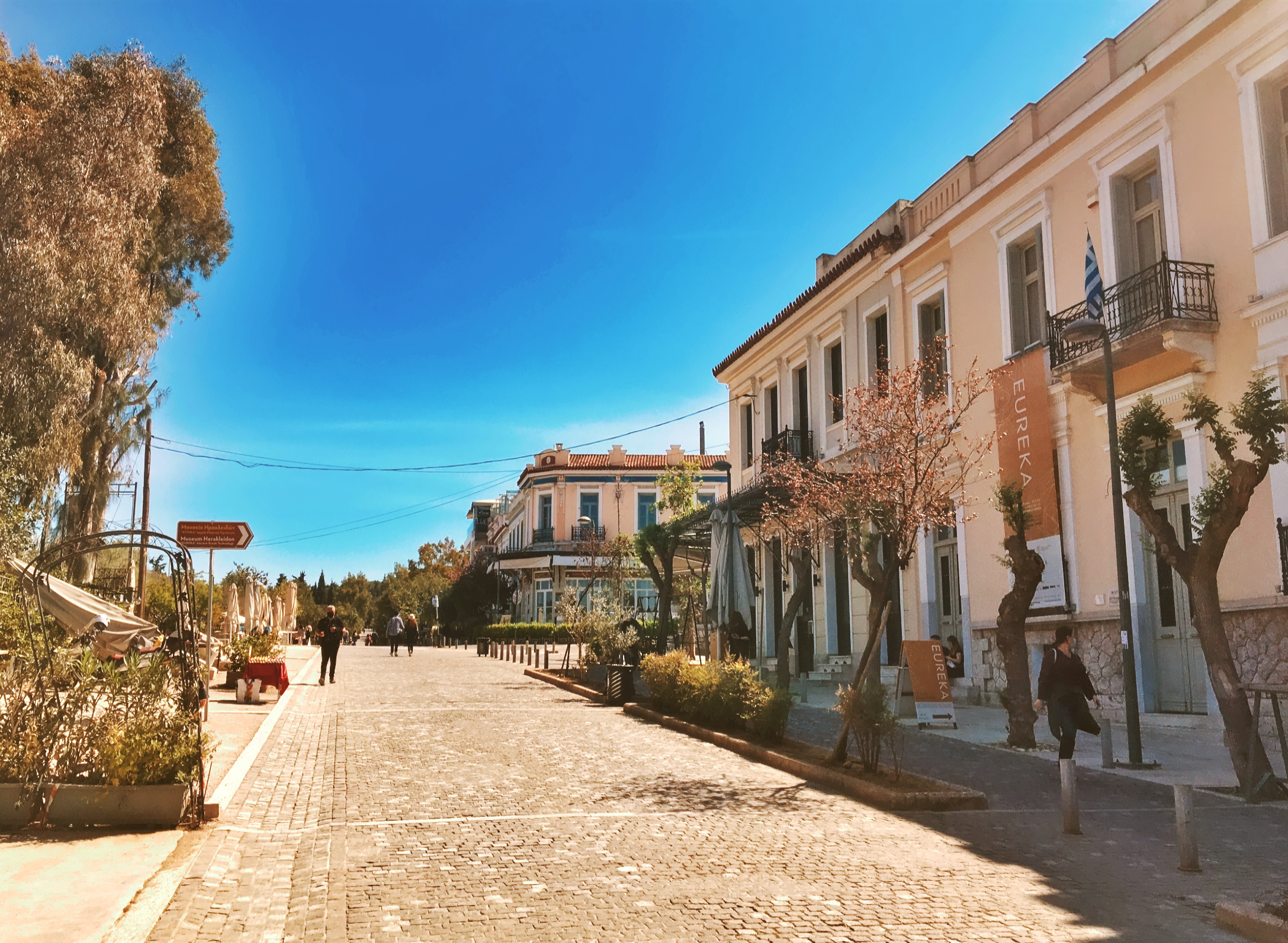 Along with Plaka, Thiseio is one of Athens' oldest and most scenic neighborhoods. Thiseio hides a photograph in every corner.  Having the Acropolis hill on sight, it is full of 19th century old beautiful neoclassical houses, museums, old churches, pedestrianized streets and cute, narrow lanes.  The Temple of Hephaestus described in Part I is also located within the Thiseio area, as well as the National Observatory of Athens.  The cafes and restaurants with the Acropolis view are always a good idea, and especially on weekends the area is full of life.  On the famous Apostolou Pavlou street you will find Thiseion open-air cinema that has been described as the most beautiful in the world, and also musicians performing, and many local artists selling jewellery and other art items in stalls.

Another Insta-Athens is over but not done, as you should hold your breath for the last part; part III.  Until then, keep instagramming!