The southernmost of Greece’s Cycladean islands, Santorini, formed in its current incarnation from a series of cataclysmic volcanic explosions, it is one of the loveliest and most awesome Mediterranean settings someone can come across.

Santorini is an astonishing sight from the air – a collection of five islands floating on the blue of the Aegean Sea like an incomplete jigsaw puzzle. Once they were a single landmass – a walnut-shaped island known as Strongyli (“the round one”). When Strongyli’s volcano erupted catastrophically around 1650BC, the island split initially into three separate parts. Together, they now form the walls of a massive, fragmented crater enclosing a central lagoon that was created when the middle of the original landmass collapsed into the sea. Subsequent underwater eruptions (the most recent in 1570) threw up the two further islands – Palia Kameni and Nea Kameni (“Old Burnt Island” and “New Burnt Island”) – that complete the archipelago.

Thira, the largest of the trio of islands, with 69km of coastline is where most visitors flock. For sun-worshippers, the southern and eastern coasts offer vast black-sand beaches and (in the more commercial resorts such as Kamari) as many cocktail bars and water sports centres as anyone could reasonably hope for. For others, it’s the spectacular amphitheatre of the caldera itself, and its cosmopolitan mountain villages, that prove the irresistible attractions. Santorini sunsets, viewed from the caldera, are said to be among the most beautiful in the world – a glorious explosion of colour. 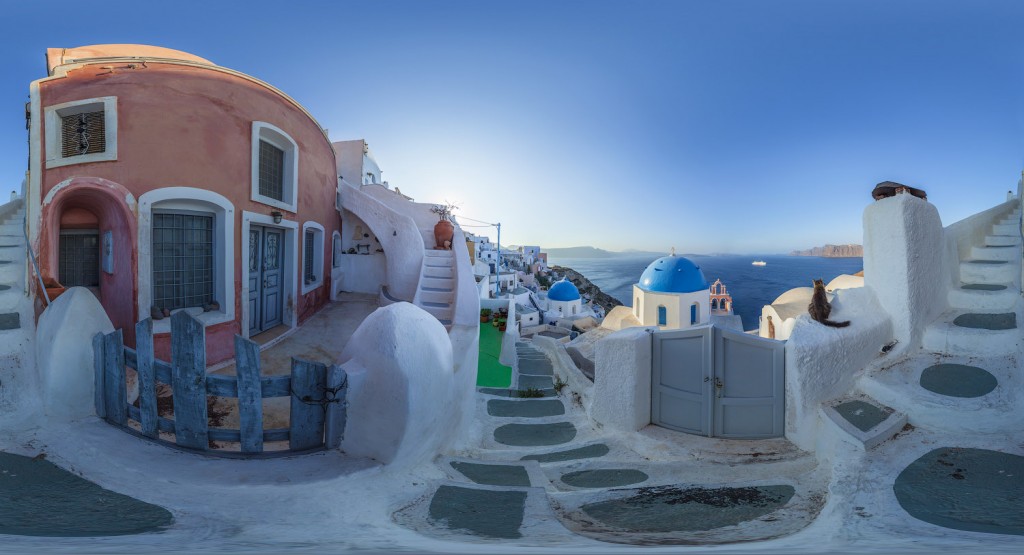 Wonderful colours of the island

Two key places to visit on the caldera are the small town of Fira, on the west of the island, and the village of Oia in the north. Fira is Santorini’s capital and, as a popular destination for day-trippers from cruise ships, one of the busiest spots on the island. Flower-filled, pretty, and packed with warrens of little side streets cobbled with black lava stone, it still manages to retain much of its original character.

At 360 metres above sea level, Imerovigli is the highest point on the caldera. Its name means “daytime lookout”, as it was once a key vantage point for the islanders to watch out for pirates. Nowadays, it’s home to an array of boutique hotels, all built – as conservation laws require – in the style of traditional cliff houses, with rooms burrowing into the rock-face and spilling in terraces down the cliffside.

No visit to Santorini is complete without being introduced to the local wines and cuisine with many food delicacies. Combine a folklore museum tour with the tasting of popular Greek wine varieties enhanced by the unique flavors of exclusive Cycladic cuisine!